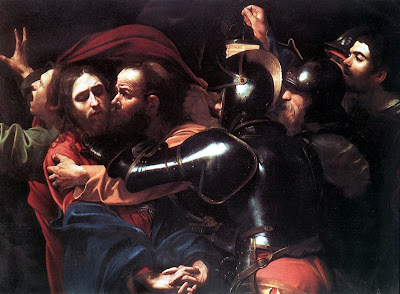 Today in some locales is known as Spy Wednesday, referencing Judas's action in Matthew 26: 14-16:
“Then went one of the twelve, who was called Judas Iscariot, to the chief priests, and said to them: ‘What will you give me, and I will deliver him unto you?’ But they appointed him thirty pieces of silver. And from thenceforth he sought opportunity to betray him.”
The beginning of Matthew 26 seems to place that event two days before Good Friday. Thus, a spy entered the midst of the disciples on the Wednesday of Holy Week, when Judas resolved to betray our Lord for thirty pieces of silver.

Yesterday, we held our annual Holy Week gathering of the priests on the occasion of the Chrism Mass.  We began with a Penitential Service at 3:30PM in the Cathedral, which I presided, with Pere Yvan Mathieu, s.m., preaching and the two Episcopal Vicars, Daniel Berniquez and Joseph Muldoon leading the examination of conscience.  We all had the opportunity to celebrate our personal confession in preparation for the Sacred Triduum prior to repairing to my residence for a reception.
Then we moved to the Parish Hall for a Festive Dinner at which this year's jubilarians were honoured (we celebrated those marking 60, 55, 50, 40 and 25 years of priesthood) with a slide-show of them in their earlier years, a few remarks and a presentation to those who were able to be present.
Finally, at 7:30 PM at the Chrism Mass we gathered with the deacons and their wives, religious women and men embodying various forms of consecrated life and great numbers of the lay faithful from around the many parishes and groups across the Archdiocese (the St. Rene Goupil Deaf Community, chaplains at the hospitals, etc., who received the sacred oils at the close of the Mass).

The oils were presented to me for blessing and consecration by representative persons: a priest hospital chaplain and a parish visitor of the sick from Hawkesbury for the Oil of the Infirm, a catechist and two catechumens from Holy Korean Martyrs Parish for the Oil of Catechumens and a parish religious education coordinator and recently confirmed young man from Rockland spoke of the Sacred Chrism.  There was a reception in the cathedral parish hall afterwards.
Photos of the Jubilarians Dinner will be posted later this week.  Meantime, here are some others from the Chrism Mass taken by Heribert Riesbeck: 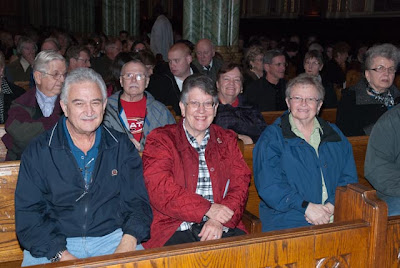 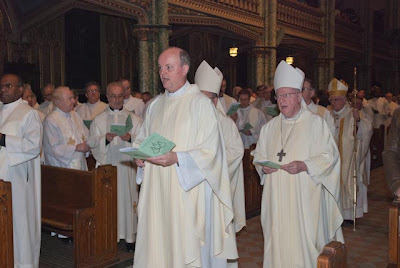 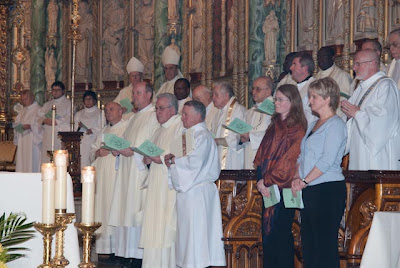 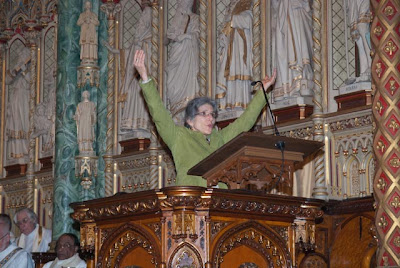 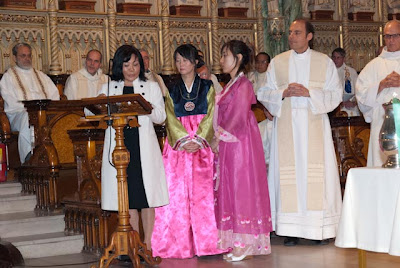 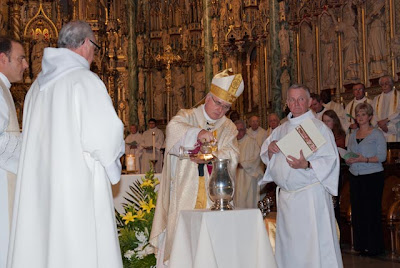 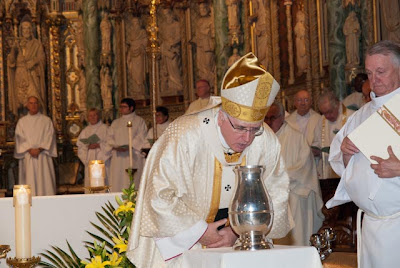 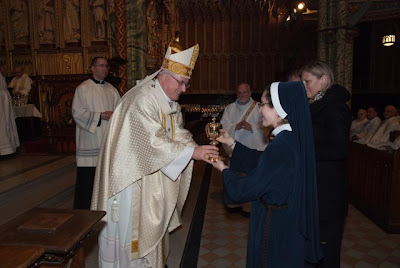 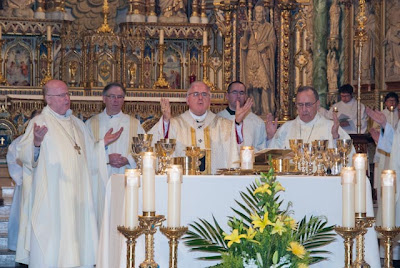 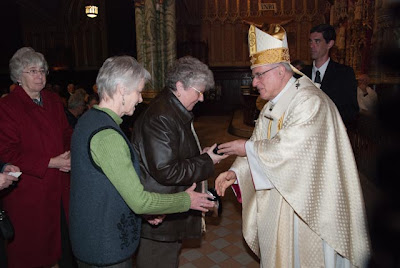 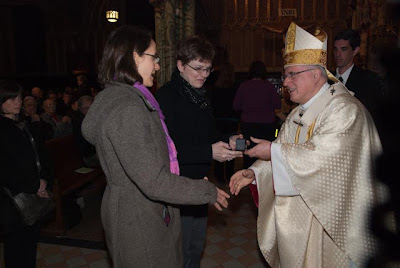 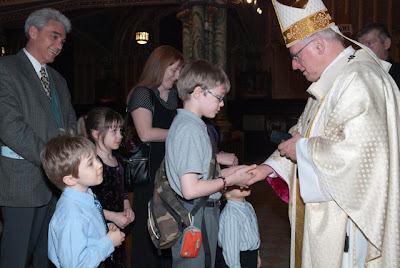 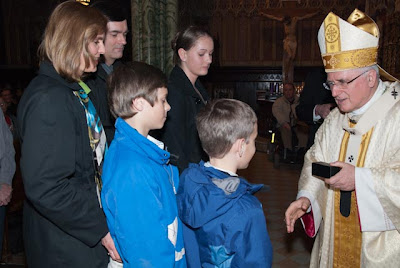 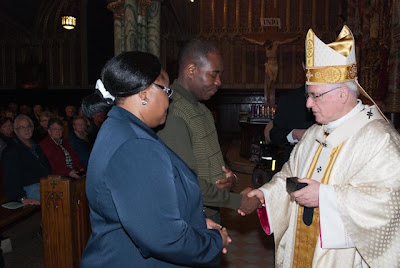 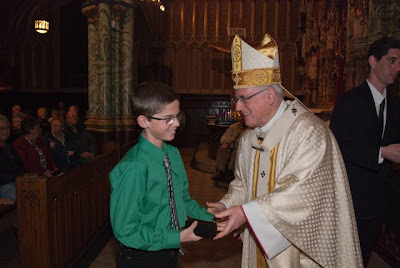 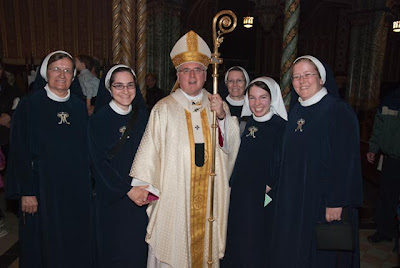 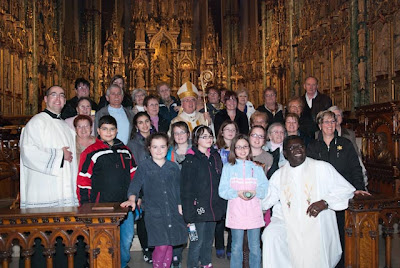 AMBRY OR CHRISMATORY
In entrusting the holy oils to the parish representatives and to the priests, the bishop at the close of the Chrism Mass is to remind those receiving them to treat them with great care and reverence.  This care is symolozed by the increasing presence of the ambry or chrismatory in Catholic churces to safeguard the precious oils (as may be seen in these vessels and their storage).

An ambry or chrismatory is a three-compartment vessel for each of the three holy oils: chrism, oil of catechumens, and oil of the sick.

The vessel is often inscribed with the Latin abbreviation for each holy oil: S.C. (sacrum chrisma), O.C. (oleum catechumenorum), and O.I. (oleum infirmorum), which have been in use since the Middle Ages.

One set of these oils is kept on reserve in the diocesan cathedral, and smaller sets for use in a parish, hospital, or infirmary are kept locked in a cupboard in the sanctuary of each church. In recent years, some parishes have installed an ambry in the church to show forth the blessed oils. 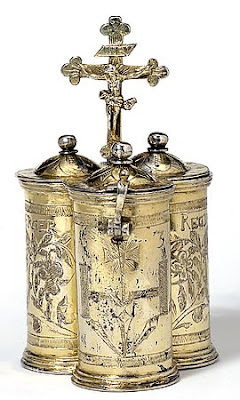