Collect for the 19th Sunday in Ordinary Time
Almighty ever-living God, whom, taught by the Holy Spirit, we dare to call our Father, bring, we pray, to perfection in our hearts the spirit of adoption as your sons and daughters, the inheritance which you have promised. Through our Lord. 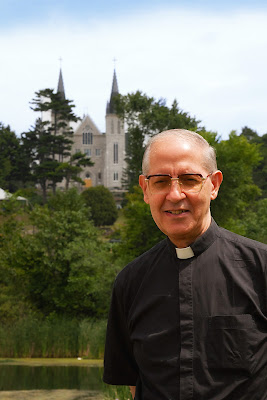 Members of the Jesuits in English Canada Province, their lay collaborators and several members of the Province of French Canada and Haiti (as this was the day of Mgr Marchand's funeral, I was absent when the photo was taken): 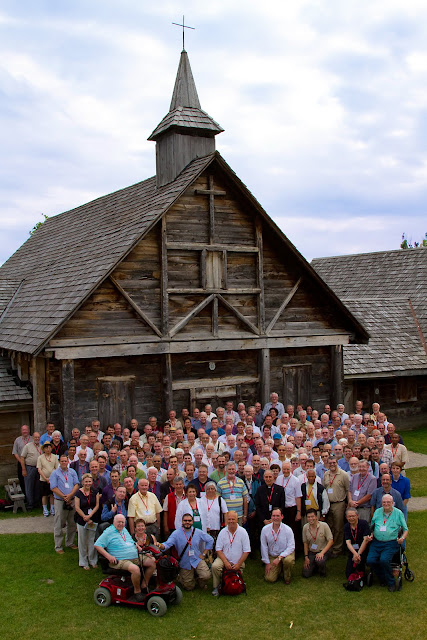 St. Dominic de Guzman is depicted carrying a tall cross, with his dog and the star shining above his head

Saint Dominic is the patron saint of astronomy and science, a reflection of his lifelong love of learning and teaching. He was a well-educated man who believed that a strong intellectual base would allow a man to preach more convincingly, and therefore convert more people to the faith.

To that end, he established the Dominican Order, and chose the motto "to praise, to bless, to preach". A central tenet of the Order was to incorporate intellectual pursuits with the needs of everyday people. Where heretics were normally punished or terrorized for not believing (this was around the time of the Inquisition), St. Dominic believed that by preaching from an intelligent base, one could peacefully convert people to the faith.

When Dominic was baptized as a baby, his mother reportedly saw a star shining from his chest. In portraits he is often depicted with a star shining on or above his head. And although there is no evidence that St. Dominic ever studied astronomy himself, this aspect of scientific learning was well known when St. Dominic attended university, and it's certainly possible that he was exposed to the mysteries of the heavens.

St. Dominic is also the patron saint of falsely accused people. There are stories of Dominic himself being falsely accused as a boy, mostly as a result of boyish pranks played by schoolmates. This may be one reason why he is so closely associated with this group.


* * * * * *
May Saint Dominic come to the help of your Church by his merits and teaching, 0 Lord, and may he who was an outstanding preacher of your truth be a devoted intercessor on our behalf. Through our Lord.
Posted by Archbishop Terry at 2:40 PM