Death of Archbishop Austin Emile BURKE - Solemnity of the Assumption

On Friday, I was saddened to learn of the death of my predecessor as Archbishop of Halifax, His Grace Austin E. Burke (twelfth Bishop and tenth Archbishop of Halifax July 8, 1991- January 13, 1998; earlier he had been the second Bishop of Yarmouth, February 1, 1968-July 8, 1991).  He was blessed with a cheerful personality, and I always found him most encouraging to me; it was delight to visit him.
Regrettably, my absence from Canada makes it impossible for me to attend the funeral, which will be celebrated in St. Mary's Cathedral Basilica tomorrow afternoon at 2 o'clock.
The following is the report on his passing by M. Lightstone in Halifax's Chronicle-Herald newspaper; in the photo, also courtesy of the Chronicle, Archbishop Burke is in the front and I am following him (I cannot recall the occasion) : 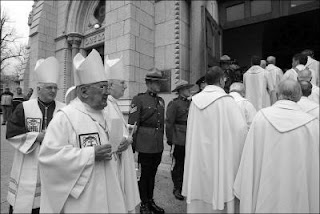 Most Reverend Austin Emile Burke, Archbishop Emeritus of Halifax, died Friday in a Halifax nursing home. He was 89.

Born in Sluice Point, Yarmouth County, in 1922, Burke was ordained to the priesthood in 1950.

He retired in 1998 and died at Parkstone Enhanced Care where he spent the last years of his life, says an obituary provided by the Archdiocese of Halifax.

Pope Paul VI named Burke the Bishop of Yarmouth in 1968. "For the next 23 years, he served the people of the Church of Yarmouth as a kind pastoral leader for which he was well appreciated and much loved by the people entrusted to his care," the obituary says.

"In addition to providing pastoral leadership and administrative direction for the people of God in the Diocese of Yarmouth and the Archdiocese of Halifax, Archbishop Burke has served the church in advisory and leadership roles regionally and nationally," the obituary says.

Burke represented Canadian bishops as an observer for the first post-apartheid elections in South Africa in 1994, it says.

In his younger days, he was an accomplished hockey player. "He often told the story that, as a young hockey player, he was offered the opportunity to try out for the Montreal Canadiens but chose to enter the seminary instead," says a news release accompanying the obituary.

Burke was predeceased by his parents and his siblings. He is survived by several nieces and nephews.
Funeral rites will be celebrated at St. Mary’s Cathedral Basilica, Halifax, beginning today with the Rite of Reception of the Body at 7 p.m., followed by visitation until 10 p.m.

On Monday, visitation will be in the cathedral from 8 a.m. until 10:30 a.m., and will continue in the Lady Chapel through the day. An evening prayer vigil is at 7:30 p.m.

On Tuesday, the funeral mass is at 2 p.m., with committal following at Gate of Heaven Cemetery.

Collect Prayer
for the Assumption
of the Blessed Virgin Mary
Almighty ever-living God, who assumed the Immaculate Virgin Mary, the Mother of your Son, body and soul into heavenly glory, grant, we pray, that, always attentive to the things that are above, we may merit to be sharers of her glory. Through our Lord.

Posted by Archbishop Terry at 12:04 AM