The Solemnity of the Ascension - 45th World Communications Day 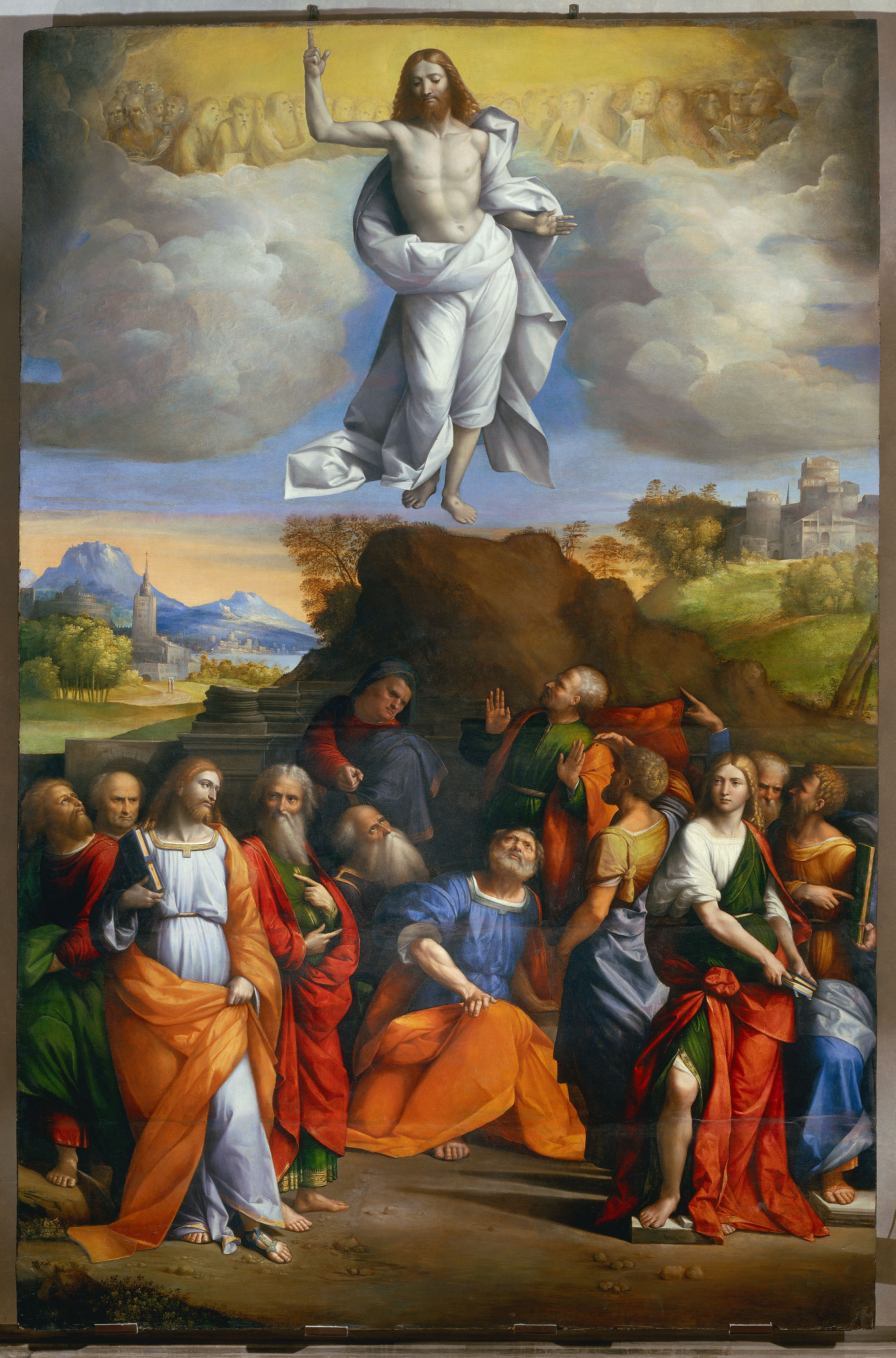 ﻿
O God, whose Son today ascended to the heavens as the Apostles looked on, grant, we pray, that in accordance with his promise we may be worthy for him to live with us always on earth and we with him in heaven. Who live and reigns with you.
* * * * * *
THE GREAT COMMISSION


When Jesus left this world to enter into the Father's glory and to be present with us in new ways (the sacraments, the preaching of the Word, etc.), he gave his apostles the mandate to make disciples everywhere in the world.  It is easy to see how this theme is associated with diverse modes of communication, hence the designation of Ascension Sunday [or the 7th Sunday of Easter] as World Communications Day.
Here is this year's message, promulgated as always on January 24, the Feast of St. Francis de Sales who dispensed printed tracts at people's doorways to win them back from Protestantism to the Catholic Church (and hence his designation as patron saint of editors and publishes of Catholic media):
MESSAGE OF HIS HOLINESS
POPE BENEDICT XVI
FOR THE 45th WORLD COMMUNICATIONS DAY
Truth, Proclamation and Authenticity of Life in the Digital Age
June 5, 2011
Dear Brothers and Sisters,

On the occasion of the 45th World Day of Social Communications, I would like to share some reflections that are motivated by a phenomenon characteristic of our age: the emergence of the internet as a network for communication. It is an ever more commonly held opinion that, just as the Industrial Revolution in its day brought about a profound transformation in society by the modifications it introduced into the cycles of production and the lives of workers, so today the radical changes taking place in communications are guiding significant cultural and social developments. The new technologies are not only changing the way we communicate, but communication itself, so much so that it could be said that we are living through a period of vast cultural transformation. This means of spreading information and knowledge is giving birth to a new way of learning and thinking, with unprecedented opportunities for establishing relationships and building fellowship.

New horizons are now open that were until recently unimaginable; they stir our wonder at the possibilities offered by these new media and, at the same time, urgently demand a serious reflection on the significance of communication in the digital age. This is particularly evident when we are confronted with the extraordinary potential of the internet and the complexity of its uses. As with every other fruit of human ingenuity, the new communications technologies must be placed at the service of the integral good of the individual and of the whole of humanity. If used wisely, they can contribute to the satisfaction of the desire for meaning, truth and unity which remain the most profound aspirations of each human being.

In the digital world, transmitting information increasingly means making it known within a social network where knowledge is shared in the context of personal exchanges. The clear distinction between the producer and consumer of information is relativized and communication appears not only as an exchange of data, but also as a form of sharing. This dynamic has contributed to a new appreciation of communication itself, which is seen first of all as dialogue, exchange, solidarity and the creation of positive relations. On the other hand, this is contrasted with the limits typical of digital communication: the one-sidedness of the interaction, the tendency to communicate only some parts of one’s interior world, the risk of constructing a false image of oneself, which can become a form of self-indulgence.

Young people in particular are experiencing this change in communication, with all the anxieties, challenges and creativity typical of those open with enthusiasm and curiosity to new experiences in life. Their ever greater involvement in the public digital forum, created by the so-called social networks, helps to establish new forms of interpersonal relations, influences self-awareness and therefore inevitably poses questions not only of how to act properly, but also about the authenticity of one’s own being. Entering cyberspace can be a sign of an authentic search for personal encounters with others, provided that attention is paid to avoiding dangers such as enclosing oneself in a sort of parallel existence, or excessive exposure to the virtual world. In the search for sharing, for “friends”, there is the challenge to be authentic and faithful, and not give in to the illusion of constructing an artificial public profile for oneself. The new technologies allow people to meet each other beyond the confines of space and of their own culture, creating in this way an entirely new world of potential friendships. This is a great opportunity, but it also requires greater attention to and awareness of possible risks. Who is my “neighbour” in this new world? Does the danger exist that we may be less present to those whom we encounter in our everyday life? Is there is a risk of being more distracted because our attention is fragmented and absorbed in a world “other” than the one in which we live? Do we have time to reflect critically on our choices and to foster human relationships which are truly deep and lasting? It is important always to remember that virtual contact cannot and must not take the place of direct human contact with people at every level of our lives.

In the digital age too, everyone is confronted by the need for authenticity and reflection. Besides, the dynamic inherent in the social networks demonstrates that a person is always involved in what he or she communicates. When people exchange information, they are already sharing themselves, their view of the world, their hopes, their ideals. It follows that there exists a Christian way of being present in the digital world: this takes the form of a communication which is honest and open, responsible and respectful of others. To proclaim the Gospel through the new media means not only to insert expressly religious content into different media platforms, but also to witness consistently, in one’s own digital profile and in the way one communicates choices, preferences and judgements that are fully consistent with the Gospel, even when it is not spoken of specifically. Furthermore, it is also true in the digital world that a message cannot be proclaimed without a consistent witness on the part of the one who proclaims it. In these new circumstances and with these new forms of expression, Christian are once again called to offer a response to anyone who asks for a reason for the hope that is within them (cf. 1 Pet 3:15).

The task of witnessing to the Gospel in the digital era calls for everyone to be particularly attentive to the aspects of that message which can challenge some of the ways of thinking typical of the web. First of all, we must be aware that the truth which we long to share does not derive its worth from its “popularity” or from the amount of attention it receives. We must make it known in its integrity, instead of seeking to make it acceptable or diluting it. It must become daily nourishment and not a fleeting attraction. The truth of the Gospel is not something to be consumed or used superficially; rather it is a gift that calls for a free response. Even when it is proclaimed in the virtual space of the web, the Gospel demands to be incarnated in the real world and linked to the real faces of our brothers and sisters, those with whom we share our daily lives. Direct human relations always remain fundamental for the transmission of the faith!

I would like then to invite Christians, confidently and with an informed and responsible creativity, to join the network of relationships which the digital era has made possible. This is not simply to satisfy the desire to be present, but because this network is an integral part of human life. The web is contributing to the development of new and more complex intellectual and spiritual horizons, new forms of shared awareness. In this field too we are called to proclaim our faith that Christ is God, the Saviour of humanity and of history, the one in whom all things find their fulfilment (cf. Eph 1:10). The proclamation of the Gospel requires a communication which is at once respectful and sensitive, which stimulates the heart and moves the conscience; one which reflects the example of the risen Jesus when he joined the disciples on the way to Emmaus (cf. Lk 24:13-35). By his approach to them, his dialogue with them, his way of gently drawing forth what was in their heart, they were led gradually to an understanding of the mystery.

In the final analysis, the truth of Christ is the full and authentic response to that human desire for relationship, communion and meaning which is reflected in the immense popularity of social networks. Believers who bear witness to their most profound convictions greatly help prevent the web from becoming an instrument which depersonalizes people, attempts to manipulate them emotionally or allows those who are powerful to monopolize the opinions of others. On the contrary, believers encourage everyone to keep alive the eternal human questions which testify to our desire for transcendence and our longing for authentic forms of life, truly worthy of being lived. It is precisely this uniquely human spiritual yearning which inspires our quest for truth and for communion and which impels us to communicate with integrity and honesty.

I invite young people above all to make good use of their presence in the digital world. I repeat my invitation to them for the next World Youth Day in Madrid, where the new technologies are contributing greatly to the preparations. Through the intercession of their patron Saint Francis de Sales, I pray that God may grant communications workers the capacity always to carry out their work conscientiously and professionally. To all, I willingly impart my Apostolic Blessing.

From the Vatican, 24 January 2011, Feast of Saint Francis de Sales
BENEDICTUS XVI
Posted by Archbishop Terry at 6:36 AM