Friday after the Seventh Sunday of Easter
O God, who by the glorification of your Christ, and the light of the Holy Spirit have unlocked for us the gates of eternity, grant, we pray, that, partaking of so great a gift, our devotion may grow deeper and our faith be strengthened. Through our Lord. 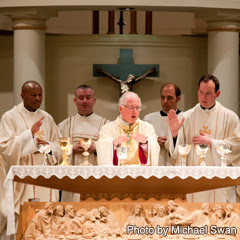 Last Saturday, I ordained two confreres to the Priesthood at Our Lady of Lourdes Church, Toronto.

This is the report in this week's Catholic Register.


Jesuits Welcome Two New Priests
by Michael Swan
TORONTO - When Canada’s first Jesuits, Frs. Pierre Biard and Ennemond Massé, arrived 400 years ago, the ship they were sailing was called the Grace of God. As William Mbugua and Michael Knox were ordained by Ottawa’s Jesuit Archbishop Terrence Prendergast June 4, the two new Jesuit priests found themselves in the same boat.

Prendergast called the two young priests “Fresh hope for the mission of the Jesuits today.”

With dozens of Jesuits present from all over North America, Knox and Mbugua stood up and lay down for the same ordination. But they came from vastly different starting places.

Toronto boy Knox entered the novitiate in 1997 at 18, straight out of Cardinal Carter Academy for the Arts. Mbugua started off in small-town Kenya and worked his way to the University of Manitoba where his encounter with Canadian Jesuits changed his life.

Mbugua’s family descended on Toronto’s Our Lady of Lourdes parish from Kenya in crowds and showed the Canadians what real celebration looks and sounds like as Mbugua’s sisters, cousins and aunts danced the gifts up to the altar to the sound of drums.

A special place was given to the mothers.

“You have given us and given the Church a great gift in your sons,” Regis College rector Fr. Bert Foliot told the women. 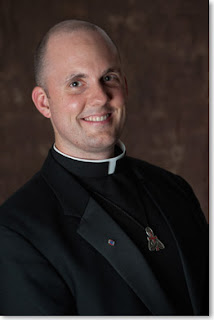 This Saturday morning at 10 o'clock, I will preside at the priestly ordination of James Lowe of the Companions of the Cross at Ottawa's Notre Dame Cathedral Basilica.
All are most welcome.
* * *
PRIESTLY ANNIVERSARY
Thirty-nine years ago today, the late Bishop Thomas B. Fulton, then auxiliary bishop of Toronto and later Bishop of St. Catharines, ordained three other Canadian Jesuits (R. Frank Obrigewitsch and the late Ronald Barnes and the late Brian Massie) and me to Christ's priesthood.
Please pray for our priests--the newly ordained and their elders--and give thanks to the Lord with Father Frank and me for the graces of these years of priestly life and ministry.
* * * * * *
Posted by Archbishop Terry at 6:59 AM