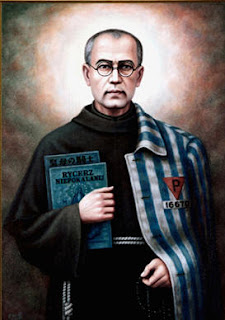 Maximilian Kolbe (8 January 1894–14 August 1941), also known as Maksymilian or Massimiliano Maria Kolbe and "Apostle of Consecration to Mary," born as Rajmund Kolbe, was a Polish Conventual Franciscan friar who volunteered to die in place of a stranger in the Nazi concentration camp of Auschwitz in Poland.

He was canonized by the Catholic Church as Saint Maximilian Kolbe on 10 October 1982 by Pope John Paul II, and declared a martyr of charity. He is the patron saint of drug addicts, political prisoners, families, journalists, prisoners, amateur radio and the pro-life movement.Pope John Paul II declared him "The Patron Saint of Our Difficult Century".

Last evening, we had the annual barbecue for entering and returning seminarians. After prayers (drawn from the Holy Father's letter to priests for this Year of the Priesthood and the Prayer for Vocations), we settled into some fine food on a lovely warm day (rare this summer, more common lately). Then they posed for the annual seminarians' photo. 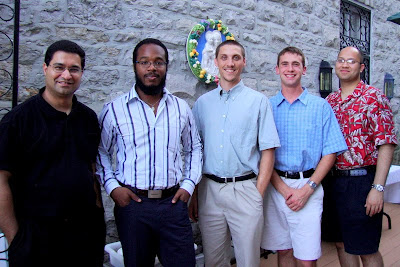 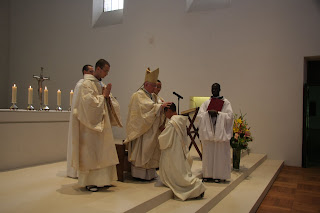 “The seminary years are a time of journeying, of exploration, but above all of discovering Christ. It is only when a young man has had a personal experience of Christ that he can truly understand the Lord’s will and consequently his own vocation” --Pope Benedict XVI, Address to Seminarians (World Youth Day 2005)

Dear brother priests, the celebration of the 150th anniversary of the death of Saint John Mary Vianney (1859) follows upon the celebration of the 150th anniversary of the apparitions of Lourdes (1858). In 1959 Blessed Pope John XXIII noted that “shortly before the Curé of Ars completed his long and admirable life, the Immaculate Virgin appeared in another part of France to an innocent and humble girl, and entrusted to her a message of prayer and penance which continues, even a century later, to yield immense spiritual fruits. 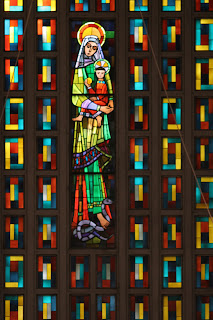 The life of this holy priest whose centenary we are commemorating in a real way anticipated the great supernatural truths taught to the seer of Massabielle. He was greatly devoted to the Immaculate Conception of the Blessed Virgin; in 1836 he had dedicated his parish church to Our Lady Conceived without Sin and he greeted the dogmatic definition of this truth in 1854 with deep faith and great joy.”

The Curé would always remind his faithful that “after giving us all he could, Jesus Christ wishes in addition to bequeath us his most precious possession, his Blessed Mother”.

To the Most Holy Virgin I entrust this Year for Priests. I ask her to awaken in the heart of every priest a generous and renewed commitment to the ideal of complete self-oblation to Christ and the Church which inspired the thoughts and actions of the saintly Curé of Ars. It was his fervent prayer life and his impassioned love of Christ Crucified that enabled John Mary Vianney to grow daily in his total self-oblation to God and the Church.

May his example lead all priests to offer that witness of unity with their Bishop, with one another and with the lay faithful, which today, as ever, is so necessary. Despite all the evil present in our world, the words which Christ spoke to his Apostles in the Upper Room continue to inspire us: “In the world you have tribulation; but take courage, I have overcome the world” (Jn 16:33).

Our faith in the Divine Master gives us the strength to look to the future with confidence. 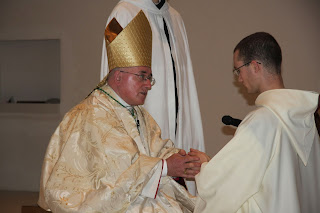 Dear priests, Christ is counting on you. In the footsteps of the Curé of Ars, let yourselves be enthralled by him. In this way you too will be, for the world in our time, heralds of hope, reconciliation and peace!
With my blessing,