The Beheading of St. John the Baptist; Keeping in Touch with Jesuits; Homeward Bound 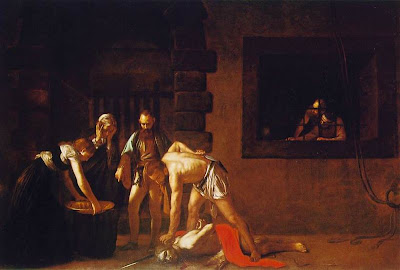 It seems unusual at the end of the reading of the gospel for today's liturgy to declare, "The gospel of the Lord" as it recounts the saga of the Baptist's imprisonment and martyrdom (=witnessing to Christ).

What is clear in Mark's gospel, however, is the parallels made between John and Jesus and then between Jesus and his disciple. John heralded Christ not only by his preaching and baptizing ministry, but by his whole way of life--his speaking God's truth to power, namely that it was not right for Herod Antipas to have "married" Herodias, his brother Philip's wife--and by foreshadowing the death of Jesus by his witness and dying for righteousness, God's plan for marriage, which is demanding.

What Jesus and John did--namely, stand up for the truth, including in regard to marriage--we disciples of Jesus are called to do, being ready, if necessary, even to lay down our lives for the gospel and its divinely-founded teachings.

A number of years ago, I had the joy and privilege of visiting Gozo and Malta and saw this remarkable painting by Michelangelo Caravaggio. The following exposition of its style and content is courtesy of Wikipedia.

The Beheading of Saint John the Baptist is a painting finished in 1608 by the Italian Baroque painter Caravaggio, housed in the St. John's Co-Cathedral of Valletta, Malta. The most important painting that Caravaggio made in Malta considered by many to be his greatest masterpiece.

A magical balance of all the parts characterizes the piece. It is no accident that the artist brings into the painting precise reference to the setting, placing behind the figures as a backdrop the severe 16th century architecture of the prison building.

At the window, two figures silently witness the scene, and the commentators are thus drawn into the painting. They are not projected toward the outside as Caravaggio painted in the Martyrdom of St. Matthew.

This is a final compendium of Caravaggio's art. Figures well-known to him return (the old woman, the youth, the nude ruffian, the bearded nobleman), as do Lombard elements.

The technical means adhere to the deliberate, programmatic limitation to which Caravaggio adapts them; but amid these soft tones, these dark colours, is an impressive sense of drawing that the artist does not give up, and that is visible even through the synoptic glints of light of his late works.

This eminently classical balance, which projects the event beyond contingency, unleashes a harsh drama that is even more effective to the extent that, having given up the "aesthetic of exclamation" forever, Caravaggio limits every external, excessive sign of emotional emphasis.

The painter signed in the Baptist's blood: "f (perhaps understood as fecit rather than frater) michela...". This is the seal he placed on what may well be his greatest masterpiece. 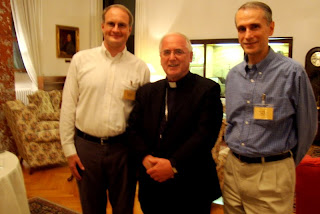 While lodging at the Pontifical North American College these past few days, I encountered a couple of Jesuits who serve as spiritual directors for the more than 200 seminarians who are studying in Rome and being formed at the NAC, as it is commonly known. Both Brendans are from the Maryland Province; Brendan Lally is here for his seventh and final year, while Brendan Hurley is the new man on the block.

A number of other religious orders are represented on the formation team, under the strong leadership of the Rector, Msgr. James Checchio and other diocesan priests who serve with him.

Yesterday, the new men's first offical day they began with Mass at the Altar of the Confession (in this case, the "confession" is also by the surrender of his life) of the Apostle Peter, the first Vicar of Christ.

As we finished our Vox Clara meeting a day early, I also used the opportunity to visit the Jesuit Curia (headquarters) where I spoke briefly with Father General Adolfo Nicholas (who had other visitors to receive) and renewed acquaintances with other brothers in Christ, who serve the universal Society of Jesus. 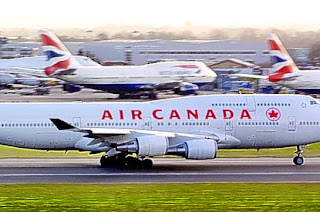 This afternoon, I will fly Air Canada from Rome FCO to Toronto YYZ, then transfer to a flight to Ottawa, arriving home in the late evening.

I am grateful for this time away, and look forward to the many challenges that lie ahead in the next ten days, particularly guiding the Priests' Retreat for our English-sector priests from August 31-September 3 at Our Lady of the Cape, Cap-de-la-Madeleine, QC, which is commended to the prayers of all.
Posted by Archbishop Terry at 1:07 AM