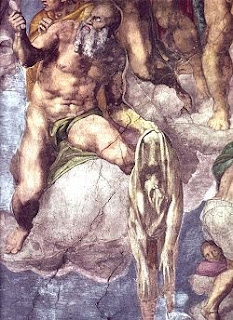 August 24: Feast of the Apostle Bartholomew (aka Nathanael)

In the New Testament, Bartholomew is mentioned only in the lists of the apostles.

Some scholars identify him with Nathanael, a man of Cana in Galilee who was summoned to Jesus by Philip. Jesus paid him a great compliment: “Here is a true Israelite. There is no duplicity in him” (John 1:47b).

When Nathanael asked how Jesus knew him, Jesus said, “I saw you under the fig tree” (John 1:48b). Whatever amazing revelation this involved, it brought Nathanael to exclaim, “Rabbi, you are the Son of God; you are the King of Israel” (John 1:49b). But Jesus countered with, “Do you believe because I told you that I saw you under the fig tree? You will see greater things than this” (John 1:50b).

Nathanael did see greater things. He was one of those to whom Jesus appeared on the shore of the Sea of Tiberias after his resurrection (see John 21:1-14).

There is a tradition that Bartholomew/Nathanael died by martyrdom with his skin stripped from his body. For wahtever reason, when Michelangelo came to depict this saint in the Last Judgment (in the Sistine Chapel), he put his facial features on the martyr. Was he expressing his wish to be considered without guile despite all the controversies in which he was implicated.

Wouldn't it be wonderful for it to be said of every Christian that he or she was "without guile"?

A Vistor from Perugia 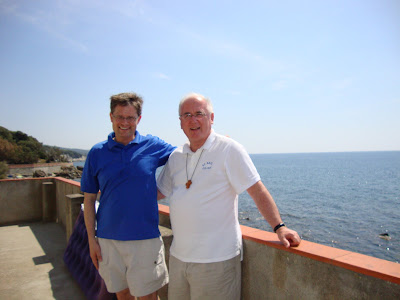 Several Canadian priests about to begin studies in Rome this fall are studying Italian at the University of Perugia: Fathers Kevin Belgrave of Toronto (Moral Theology), Adam Voisin of Hamilton (Canon Law), John Fletcher of the Companions of the Cross (Mariology) and Ottawa's own Geoffrey Kerslake (Liturgy).

Given that exams aren't until next week, Fr. Geoff was delighted to come over to the coast for a change of scene.

The train trips (5 hours each way) allowed lots of time for going over his lessons and the people here, notably the children and especially one Leonardo, have been helping him with his Italian. 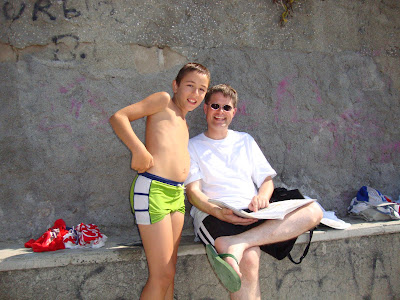 Father Geoff even celebrated Mass for the sisters yesterday morning! The homily, needless to say, was very, very brief!

Suor Giusy
One of the strong personalities of the convent, besides the superior Suor Daria, is Sister Giusy (nick name for Suor Giuseppina), who knows every one in town (she has served as a pastoral associate in the local parish of Santa Anna).

On a couple of evenings several us were taken for a tour of town, including to this gelateria where she cadged a double scoop of gelato for yours truly as well as a healthy dose of grappa to help me digest it!

Here she is with a few other guests of the Vincentian house: 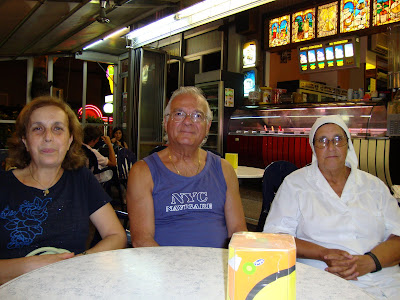 Posted by Archbishop Terry at 1:58 AM