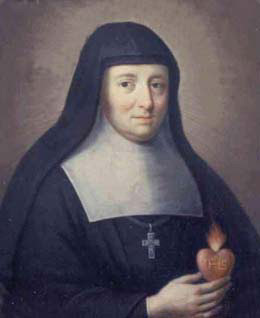 St. Jane Frances de Chantal (1562-1641) -- celebrated on December 12 universally but, because of our observance of Our Lady of Guadalupe that day, observed as an optional memorial in Canada today, in the USA on August 18. Best wishes to the Visitandine Sisters of Ottawa today on their feast day!

Jane Frances was wife, mother, nun and founder of a religious community. Her mother died when Jane was 18 months old, and her father, head of parliament at Dijon, France, became the main influence on her education. She developed into a woman of beauty and refinement, lively and cheerful in temperament.

At 21 she married Baron de Chantal, by whom she had six children, three of whom died in infancy. At her castle she restored the custom of daily Mass, and was seriously engaged in various charitable works.

Jane's husband was killed after seven years of marriage, and she sank into deep dejection for four months at her family home. Her father-in-law threatened to disinherit her children if she did not return to his home. He was then 75, vain, fierce and extravagant. Jane Frances managed to remain cheerful in spite of him and his insolent housekeeper.

When she was 32, she met St. Francis de Sales, who became her spiritual director, softening some of the severities imposed by her former director. She wanted to become a nun but he persuaded her to defer this decision. She took a vow to remain unmarried and to obey her director.

After three years Francis told her of his plan to found an institute of women which would be a haven for those whose health, age or other considerations barred them from entering the already established communities. There would be no cloister, and they would be free to undertake spiritual and corporal works of mercy. They were primarily intended to exemplify the virtues of Mary at the Visitation (hence their name, the Visitation nuns): humility and meekness.

The usual opposition to women in active ministry arose and Francis de Sales was obliged to make it a cloistered community following the Rule of St. Augustine. Francis wrote his famous Treatise on the Love of God for them.

The congregation (three women) began when Jane Frances was 45. She underwent great sufferings: Francis de Sales died; her son was killed; a plague ravaged France; her daughter-in-law and son-in-law died. She encouraged the local authorities to make great efforts for the victims of the plague and she put all her convent’s resources at the disposal of the sick.

During a part of her religious life, she had to undergo great trials of the spirit—interior anguish, darkness and spiritual dryness. She died while on a visitation of convents of the community.

St. Vincent de Paul said of Jane Frances: “She was full of faith, yet all her life had been tormented by thoughts against it. While apparently enjoying the peace and easiness of mind of souls who have reached a high state of virtue, she suffered such interior trials that she often told me her mind was so filled with all sorts of temptations and abominations that she had to strive not to look within herself...But for all that suffering her face never lost its serenity, nor did she once relax in the fidelity God asked of her. And so I regard her as one of the holiest souls I have ever met on this earth” (Butler’s Lives of the Saints). 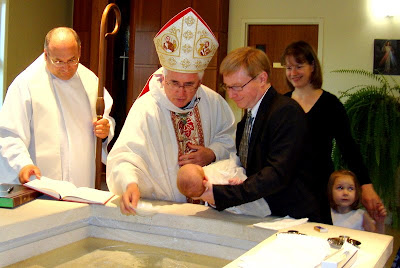 In today’s world, as in the troubled times of the Curé of Ars, the lives and activity of priests need to be distinguished by a forceful witness to the Gospel. As Pope Paul VI rightly noted, “modern man listens more willingly to witnesses than to teachers, and if he does listen to teachers, it is because they are witnesses”.

Lest we experience existential emptiness and the effectiveness of our ministry be compromised, we need to ask ourselves ever anew: “Are we truly pervaded by the word of God? Is that word truly the nourishment we live by, even more than bread and the things of this world? Do we really know that word? Do we love it? Are we deeply engaged with this word to the point that it really leaves a mark on our lives and shapes our thinking?” Just as Jesus called the Twelve to be with him (cf. Mk 3:14), and only later sent them forth to preach, so too in our days priests are called to assimilate that “new style of life” which was inaugurated by the Lord Jesus and taken up by the Apostles.

It was complete commitment to this “new style of life” which marked the priestly ministry of the Curé of Ars. Pope John XXIII, in his Encyclical Letter Sacerdotii nostri primordia, published in 1959 on the first centenary of the death of Saint John Mary Vianney, presented his asceticism with special reference to the “three evangelical counsels” which the Pope considered necessary also for priests: “even though priests are not bound to embrace these evangelical counsels by virtue of the clerical state, these counsels nonetheless offer them, as they do all the faithful, the surest road to the desired goal of Christian perfection”.

The Curé of Ars lived the “evangelical counsels” in a way suited to his priestly state. His poverty was not the poverty of a religious or a monk, but that proper to a priest: while managing much money (since well-to-do pilgrims naturally took an interest in his charitable works), he realized that everything had been donated to his church, his poor, his orphans, the girls of his “Providence”, his families of modest means. Consequently, he “was rich in giving to others and very poor for himself”

As he would explain: “My secret is simple: give everything away; hold nothing back” When he lacked money, he would say amiably to the poor who knocked at his door: “Today I’m poor just like you, I’m one of you”. At the end of his life, he could say with absolute tranquility: “I no longer have anything. The good Lord can call me whenever he wants!”

His chastity, too, was that demanded of a priest for his ministry. It could be said that it was a chastity suited to one who must daily touch the Eucharist, who contemplates it blissfully and with that same bliss offers it to his flock. It was said of him that “he radiated chastity”; the faithful would see this when he turned and gazed at the tabernacle with loving eyes”.

Finally, Saint John Mary Vianney’s obedience found full embodiment in his conscientious fidelity to the daily demands of his ministry. We know how he was tormented by the thought of his inadequacy for parish ministry and by a desire to flee “in order to bewail his poor life, in solitude”. Only obedience and a thirst for souls convinced him to remain at his post.

As he explained to himself and his flock: “There are no two good ways of serving God. There is only one: serve him as he desires to be served”. He considered this the golden rule for a life of obedience: “Do only what can be offered to the good Lord”.
Posted by Archbishop Terry at 7:42 AM