Anointing of the Sick to Celebrate San Rocco

Today I am visiting one of two Italian-language parishes in the Archdiocese of Ottawa, Madonna della Risurrezione (“Our Lady of the Resurrection”) on the very Feast of San Rocco.

Like many ethnic parishes that keep traditions of their homeland, MDR has special celebrations: an Ecumenical Gathering in the Week of Prayer for Christian Unity (January), the Celebration of Our Lady’s Queenship (late May) and the celebration in honour of San Rocco St. Roch in English , known as an intercessor for the sick. 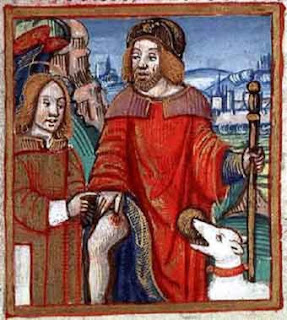 The Italian Oblate Pastor, Father Antonio Pannunzi strives to stress the spiritual dimension of these feasts, not only the cultural, social and gastronomic. Accordingly, the Eucharist today will feature the Anointing of the Sick as a way of emphasizing the healing power of Our Lord, with the intercession of the Blessed Virgin Mary, St. Roch and other heavenly patrons.

Iconographic traits of San Rocco/St. Roch include his wound on the thigh, a dog offering bread.

Born at Montpellier towards 1295; died 1327. His father was governor of that city. At his birth St. Roch is said to have been found miraculously marked on the breast with a red cross.

Deprived of his parents when about twenty years old, he distributed his fortune among the poor, handed over to his uncle the government of Montpellier, and in the disguise of a mendicant pilgrim, set out for Italy, but stopped at Aquapendente, which was stricken by the plague, and devoted himself to the plague-stricken, curing them with the sign of the cross. He next visited Cesena and other neighbouring cities and then Rome. Everywhere the terrible scourge disappeared before his miraculous power. He visited Mantua, Modena, Parma, and other cities with the same results.

At Piacenza, he himself was stricken with the plague. He withdrew to a hut in the neighbouring forest, where his wants were supplied by a gentleman named Gothard, who by a miracle learned the place of his retreat.

After his recovery Roch returned to France. Arriving at Montpellier and refusing to disclose his identity, he was taken for a spy in the disguise of a pilgrim, and cast into prison by order of the governor,--his own uncle, some writers say,--where five years later he died.

The miraculous cross on his breast as well as a document found in his possession now served for his identification. He was accordingly given a public funeral, and numerous miracles attested his sanctity.

In 1414, during the Council of Constance, the plague having broken out in that city, the Fathers of the Council ordered public prayers and processions in honour of the saint, and immediately the plague ceased. His relics, according to Wadding, were carried furtively to Venice in 1485, where they are still venerated.

His popular cult, originally in central and northern Italy and at Montpellier, spread through Spain, France, Lebanon, the Low Countries, and Germany, where he was often interpolated into the roster of the Fourteen Holy Helpers, whose veneration spread in the wake of the Black Death.

The magnificent 16th-century Scuola Grande di San Rocco and the adjacent church were dedicated to him by a confraternity at Venice, where his body was said to have been surreptitiously translated and was triumphantly inaugurated in 1485; the Scuola Grande is famous for its sequence of paintings by Tintoretto, who painted St Roch in glory in a ceiling canvas (1564). 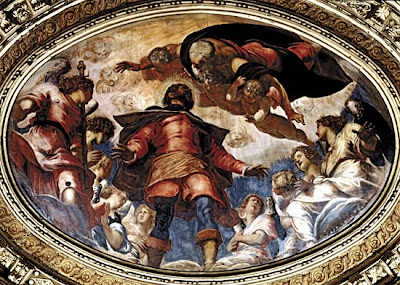 • In Bolivia, Saint Roch's day, though not as celebrated as it once was, is considered the "birthday of all dogs", in which the dogs around town can be seen with colorful ribbons tied to them.

• The main train station of Montpellier, France is named after St. Roch, as well as a church and many squares and streets.

• In Bingen, Germany there is a St. Rochus pilgrimage church on top of a hill. Every year in August a one week pilgrimage -the "St. Rochusfest"- is held in memory of a 17th century vow of the city council.

• Some churches that are named after the saint distribute, as a pietistic practice, the "bread of Saint Rocco" to parishioners on August 16, his feast day.
Posted by Archbishop Terry at 9:00 AM