I've often marvelled about historical events and saints days: the landing of John Cabot in St. John's Newfoundland on the solemnity of St. John the Baptist (June 24) or the entering and naming of the St. Lawrence estuary by Jacques Cartier on this day in 1535. A hunch is that the strong sense of the explorers' faith led them to wait a propitious saint's day before a significant event.

Driving to and from St. Anne de Beaupre over the weekend, one cannot help but notice the majesty of the mighty St. Lawrence River or the significance of the deacon Lawrence the martyr whose death for his love of Christ and the poor overwhelms even Pope Sixtus II and companion martyrs who made the supreme sacrifice three days ealier.

To celebrate the magnitude of Lawrence, I have found some data on the web that indicates the grandeur of the river system named in his honour. 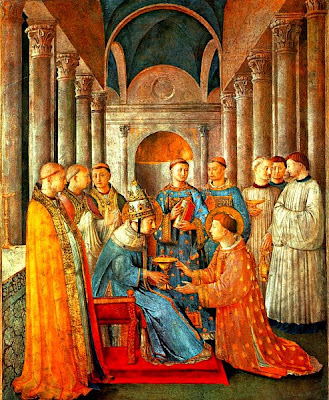 St. Lawrence was one of the seven deacons of Pope St. Sixtus II. According to a story going back to St. Ambrose, Sixtus entrusted Lawrence with the papal treasury, anticipating his own imminent arrest.

St. Lawrence distributed the money to the poor. When the Romans demanded that he produce the Pope's "treasure" he showed them the poor people. He was then condemned and martyred three days after Sixtus.

Later versions of the story have St. Lawrence tortured on a hot gridiron, but scholars believe this detail was borrowed from the passion of St. Vincent of Saragossa, another Spanish-born deacon. The Golden Legend cemented this association with the gridiron as well as the witticism about it that is imputed to him ("you can turn me over now, I'm done on this side!)

St. Lawrence is usually portrayed as a young man in a dalmatic. Often his tonsure is showing. His attributes are a Gospel book (usually closed), a gridiron, sometimes a processional cross, and often the palm that signifies martyrdom.

Some sources refer to a chalice as an attribute in images of St. Lawrence; and one does appear in Fra Angelico's fresco of St. Lawrence's ordination as deacon. In Catholic liturgy the deacon is traditionally "the minister of the cup."

There is a metaphorical reference to a chalice in St. Augustine's homily on St. Lawrence's day, and the Golden Legend's account of his miracles includes one story involving a shattered crystal chalice that was repaired by the intercession of the saint.

Best wishes to all deacons today!

Saint Lawrence River between Quebec City (seen at left) and Lévis (seen at right). The Île d'Orléans appears further in the centre.

The St. Lawrence estuary was visited by many navigators (such as John Cabot and Jacques Cartier) and Basque fishermen soon after the discovery of America (or perhaps even before).

But the first known European explorer to sail the inland part of the St. Lawrence was Jacques Cartier, during his second trip to Canada in 1535, with the help of Iroquoian chief Donnacona's two sons. As he arrived in the estuary on St. Lawrence's feast day, Cartier accordingly named it the Gulf of St. Lawrence.

Saint Lawrence River (in French: fleuve Saint-Laurent; Kaniatarowanenneh meaning big waterway in Mohawk) is a large river flowing approximately from southwest to northeast in the middle latitudes of North America, connecting the Great Lakes with the Atlantic Ocean. It is the primary drainage of the Great Lakes Basin. It traverses the Canadian provinces of Quebec and Ontario and forms part of the international boundary between Ontario and New York State, U.S.A.

The Saint Lawrence River originates at the outflow of Lake Ontario between Kingston, Ontario on the north bank, Wolfe Island in mid-stream, and Cape Vincent, New York.

From there, it passes Gananoque, Brockville, Ogdensburg, Massena, Cornwall, Montreal, Trois-Rivières, and Quebec City before draining into the Gulf of Saint Lawrence, the largest estuary in the world.

The average discharge at the mouth is 10,400 m3/s (367,273 cu ft/s). The river includes Lake Saint-Louis south of Montreal, Lac Saint-François at Salaberry-de-Valleyfield and Lac Saint-Pierre east of Montreal.

It encompasses three archipelagoes: the Thousand Islands chain near Kingston, Ontario; the Hochelaga Archipelago, including the Island of Montreal and Île Jésus (Laval); and the smaller Mingan Archipelago. Other islands include Île d'Orléans near Quebec City, and Anticosti Island north of the Gaspé.

Lake Champlain and the Ottawa, Richelieu, and Saguenay rivers drain into the St. Lawrence. The Saint Lawrence River is in a seismically active zone where fault reactivation is believed to occur along late Proterozoic to early Paleozoic normal faults related to the opening of Iapetus Ocean. The faults in the area are rift related, which is called the Saint Lawrence rift system.
Posted by Archbishop Terry at 2:02 PM