St. Francis de Paola, Hermit - Photos from the Way of the Cross The memorial of St. Francis is not celebrated this year: all days in the Paschal Octave have the rank of a Solemnity.

Saint Francis of Paola, O.M. was an Italian mendicant friar and the founder of the Roman Catholic Order of Minims. Unlike the majority of founders of men's religious orders, and like his patron saint, Francis was never ordained a priest.

St. Francis of Paola (1416-1507), born in Calabria (Kingdom of Naples) founded the “Hermits of St. Francis of Assisi” or the Order of Minims (est. 1435). ”Minims” refers to the tiniest or the least of all in the House of God. After having lived alone in a cave for five years, Francis strived, with a few companions, to live a life of humility and penance, surpassing in austerity the lifestyle of the Friars Minor (Franciscans).

In addition to the vows of poverty, chastity, and obedience, Francis exhorted his followers to a fourth obligation: a perpetual Lent. It was Francis’ conviction that through humility and heroic virtue, he and his followers would grow in the spiritual life. Francis and his minims were also committed vegans, abstaining from eggs, cheese, butter, and milk.

In addition to his prophecies and curing of the sick, St. Francis, reluctantly but at the request of Pope Sixtus IV, went to France in order to give King Louis XI his last rites. There, Francis was able to establish the Minims in the north of Europe. He contributed to peace processes between Spain and France; he was unafraid to speak his mind and severely criticized the royalty, including the King of Naples. Patron of seafarers, Francis was canonized by Leo X in 1519 and made patron of Calabria by John XXIII in 1963. 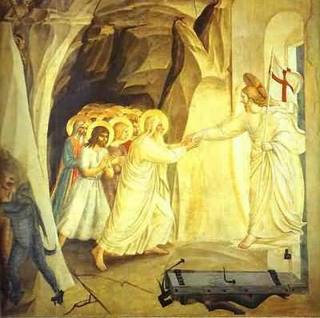 O God, who have bestowed on us paschal remedies, endow your people with heavenly gifts, so that, possessed of perfect freedom, they may rejoice in heaven over what gladdens them now on earth. Through our Lord Jesus Christ, your Son, who lives and reigns with you in the unity of the Holy Spirit, one God, for ever and ever.


OTTAWA'S WAY OF THE CROSS

On Good Friday, hundreds took part in the 6th annual Way of the Cross organized by Communion and Liberation, leading the music with a special choir for the day.  The procession began at St. Patrick's Basilica, journeyed down Kent Street to the Supreme Court of Canada, along Wellington with a stop at the Peace Tower, then along MacKenzie past the Embassy of the USA to the National Gallery and completion of the pilgrimage at Notre Dame Cathedral.

Thanks to Paul Lauzon for the crisp photos which illustrate how the weather changed as the Via Crucis proceeded. 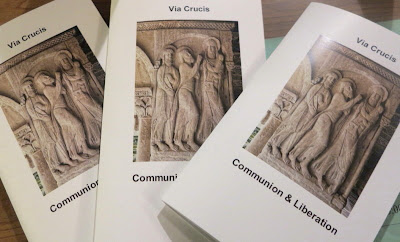 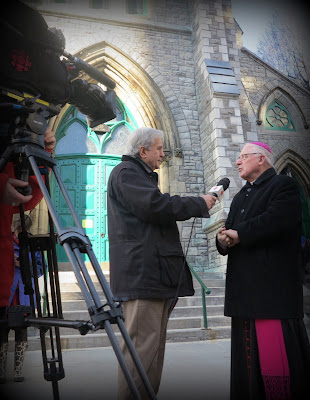 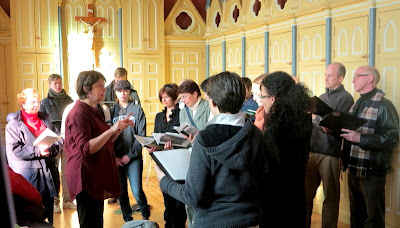 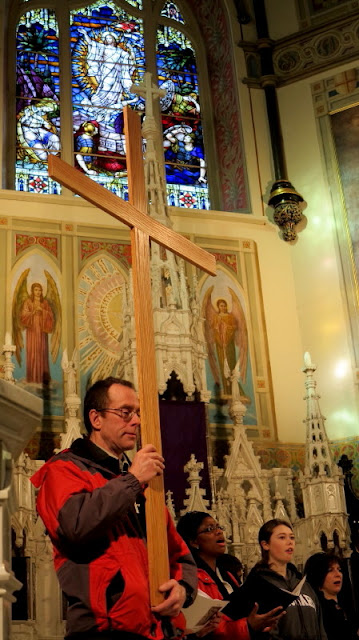 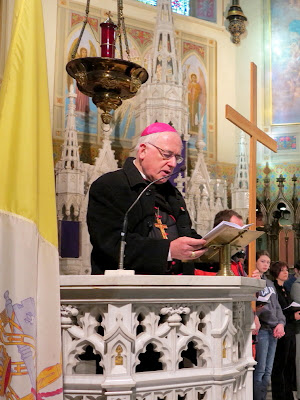 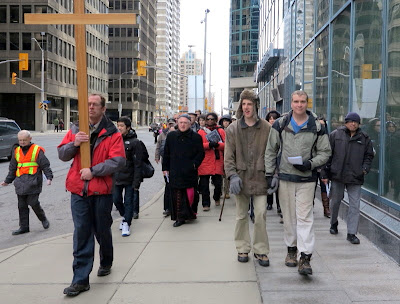 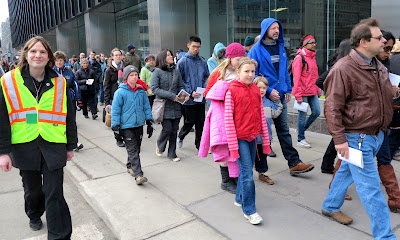 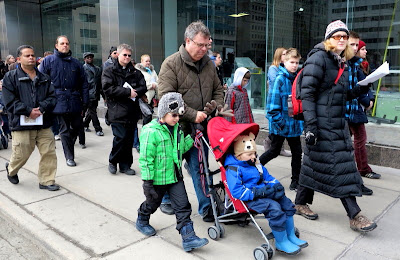 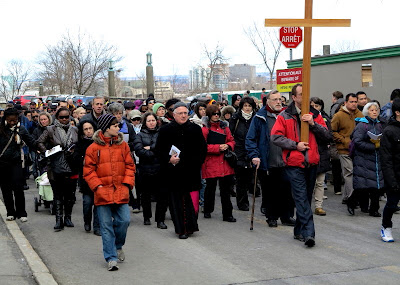 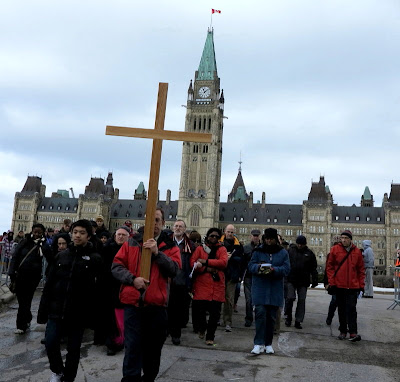 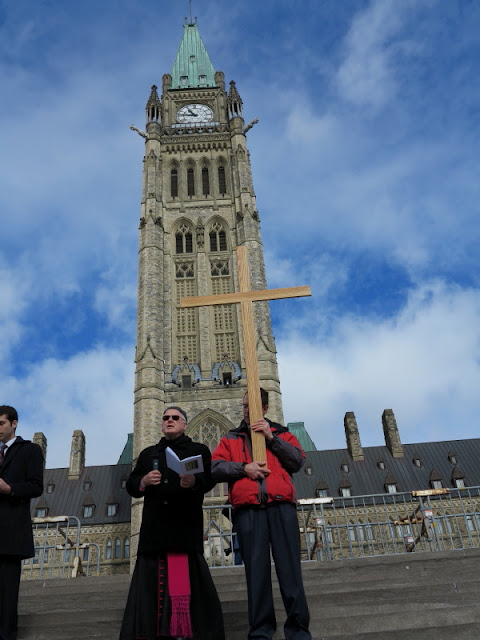 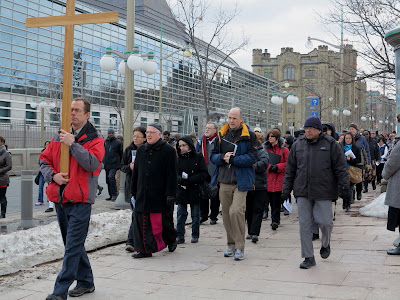 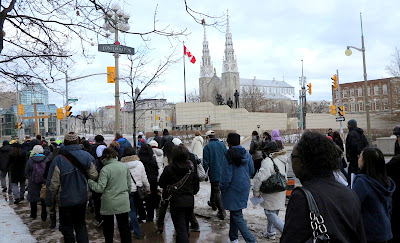 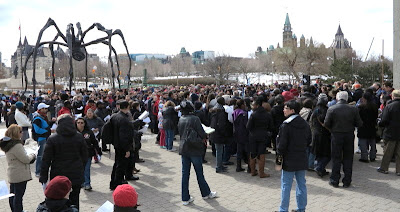 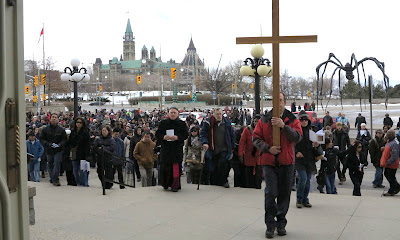 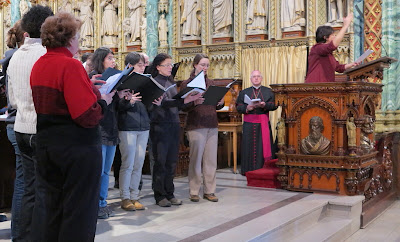 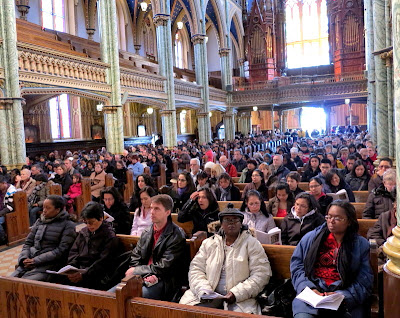 Posted by Archbishop Terry at 6:14 AM