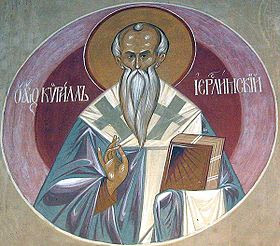 O God, who through the Bishop Saint Cyril of Jerusalem led your Church in a wonderful way to a deeper sense of the mysteries of salvation, grant us, through his intercession, that we may so acknowledge your Son as to have life ever more abundantly. Through our Lord Jesus Christ, your Son, who lives and reigns with you in the unity of the Holy Spirit, one God, for ever and ever. 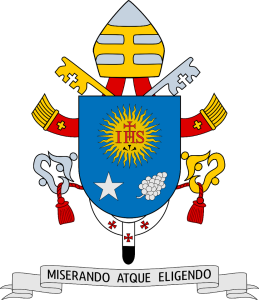 It is unclear whether Pope Francis will retain the heraldic symbols he used as a bishop and cardinal; however in the illustration (above) his arms and motto have been added to the format chosen by Pope Benedict XVI.

In any case, the article by Carol Glatz, most of which is reproduced below, explains the spirituality Bishop, later Cardinal Bergoglio had in mind at his episcopal consecration:

VATICAN CITY (CNS) -- Pope Francis' episcopal motto is based on the Gospel account of "The Call of St. Matthew," the tax collector, in a homily given by St. Bede the Venerable (cf. the breviary selection at the Office of Readings for the feast of St. Matthew, apostle and evangelist on September 21).

The pope may completely change, slightly alter or keep his episcopal coat of arms and motto for his papal coat of arms. But the choice he made as a bishop still sheds some light on the person and ministry of the man who became pope March 13.

His episcopal motto in Latin is "Miserando atque eligendo," which means "because he saw him through the eyes of mercy and chose him."

The phrase comes from a homily by St. Bede -- an English eighth-century Christian writer and doctor of the church.

St. Bede's homily looks to Matthew 9.9-13 in which Jesus saw the tax collector, Matthew, sitting at a customs post and said to him, "Follow me." St. Bede explained in his homily, "Jesus saw Matthew, not merely in the usual sense, but more significantly with his merciful understanding of men."

"He saw the tax collector and, because he saw him through the eyes of mercy and chose him, he said to him: 'Follow me.' This following meant imitating the pattern of his life -- not just walking after him. St. John tells us: 'Whoever says he abides in Christ ought to walk in the same way in which he walked.'"

St. Bede continued: "This conversion of one tax collector gave many men, those from his own profession and other sinners, an example of repentance and pardon. Notice also the happy and true anticipation of his future status as apostle and teacher of the nations. No sooner was he converted than Matthew drew after him a whole crowd of sinners along the same road to salvation."

The pope's episcopal coat of arms is a blue shield with the official seal of the Society of Jesus on top in yellow and red, representing the religious order in which the pope was ordained as a priest in 1969.

Below the seal on either side are, in white, a solid five-pointed star, which often symbolizes the Nativity, and a cluster of grapes, which designates the Eucharist. The colours and the sun motif of the coat of arms are reminiscent of the Argentine flag's blue and white colors, with a blazing yellow sun in the centre.

Update: Today the Holy See confirmed the representation above, saying that Pope Francis has decided to keep his episcopal arms and motto.  In addition, the press release indicated that the star at the bottom of the shield represents the Blessed Virgin Mary and the image at the right is really nard, representing St. Joseph (thus the Holy Family is represented through the three different images on the shield)--cf. below for the Vatican's official explanation:

Below, are found the star and the flower of spikenard. The star, according to the ancient heraldic tradition, symbolizes the Virgin Mary, Mother of Christ and of the Church, while the flower of nard indicates St. Joseph, patron of the universal Church. In the Spanish iconographic tradition, in fact, St. Joseph is depicted holding a branch of spikenard. By placing these images in his shield, the Pope wanted to express his particular devotion to the Blessed Virgin and St. Joseph.

COLLECT FOR MONDAY
OF THE 5TH WEEK OF LENT

O God, by whose wondrous grace we are enriched with every blessing, grant us so to pass from former ways to newness of life, that we may be made ready for the glory of the heavenly Kingdom. Through our Lord Jesus Christ, your Son, who lives and reigns with you in the unity of the Holy Spirit, one God, for ever and ever.
Posted by Archbishop Terry at 6:20 AM