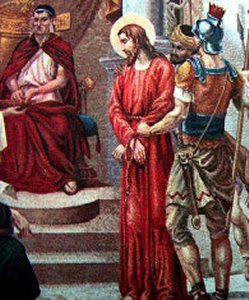 The epistle reading may be the text from Colossians which invites believers raised with Christ in Baptism to “seek the things that are above, not the things that are on earth”. For already, in a manner that may only be apprehended by faith, Christians share the hidden life that Jesus, since his glorification in the completion of the paschal mystery, enjoys with God in heaven.

Alternatively, the second reading may be the striking passage from First Corinthians which proclaims that Christ, the paschal lamb of Christians, has been sacrificed. This calls disciples to a whole new way of keeping the Christian feast of Passover, that is, “with the unleavened bread of sincerity and truth”.

[While in English, the name of our religious festival "Easter" comes from the name of the Germanic goddess of spring, other languages preserve a link with the Jewish feast of Pesach, e.g. French Pâques, Italian Pasqua, etc.]

The original participants in the Exodus ‘Passover’ were told to remove all leaven from their homes. Subsequently, among Jewish people a meticulous ritual evolved to systematically root out everything leavened. Somehow from this custom leaven came to represent false teaching or wicked conduct.

For Paul, the implications of the sacrifice of God's Son at the feast of Passover--whose death effected the forgiveness of sins—leads to consequences in the lives of disciples. Each Christian must, after undergoing Baptism which associates them with Christ's death and resurrection, commit himself or herself to living a life of upright conduct.

On Easter day, the gospel may be one of three choices: the proclamation of the resurrection featured at the Easter Vigil (this year the women and Peter's discovery of the empty tomb from Luke 24.1-12) or John's account of Mary Magdalene's encounter with the Risen Lord, whom she initially mistook for the gardener (John 20.1-18) or, at late afternoon or early evening Masses, the Lord Jesus' encounter with Cleopas and his companion on the Road to Emmaus (Luke 24.13-35).

Since the last-mentioned text will be featured on the Third Sunday of Easter, discussion of it will be reserved for then. For now, I will comment briefly on each of the other two gospel options.

All the resurrection accounts hint at the reversal of the tragedy of Jesus' death. The ritual of mourning and acts of respect toward the body of Jesus carried out by several faithful women turns to perplexity when they discover the empty tomb, then amazement at the angelic message and, finally, overwhelming joy when at last Jesus comes to meet them.

In Luke's account the message of the angels takes on a particular tone, “why do you look for the living among the dead?” There is an incompatibility now between Jesus and death. He shares eternal life with God and offers it to those who believe.

Then the angel reminds them that Jesus taught the divine necessity of his suffering (“Remember how he told you, while he was still in Galilee, that the Son of Man must be handed over to sinners, and be crucified, and on the third day rise again?”)

The promise of God's power has been realized, but the story appears unbelievable to the disciples who probably thought the resurrection would come at the end-time. Peter, however, is unsure, for he has learned that Jesus' surprising sayings come true. He marvels at the linen grave cloths but does not yet come to faith. That must await his personal encounter with the Risen One. 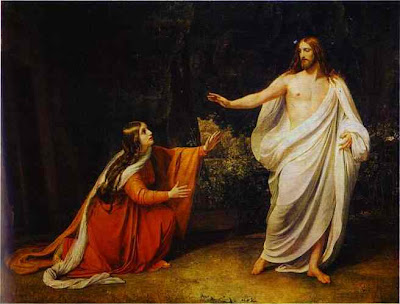 The Fourth Evangelist suggests what this encounter means for each believer by elaborating Mary Magdalene's meeting with Jesus. We see the risen Lord is both different from the one Mary knew (she thought he was the gardener), yet the same person who knows her by name (“Mary!”). Jesus tells Mary that now she and others share a new relationship with God, who has become “your (plural) Father and your God”. Jesus commissions Mary as the ‘apostle (one sent) to the apostles’, to bring the good news of the resurrection to the entire world.
Posted by Archbishop Terry at 5:41 AM