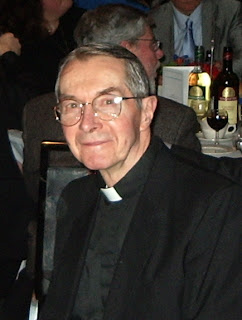 A Jesuit confrere, whom I first came to know when he taught at Loyola High School during the years I was a student there, has passed away. Father Robert C. Croken died in the early morning of Friday, March 1, 2013 at Rene Goupil House in Pickering, Ontario. He was in the 80th year of his life; he had been in religious life for 59 years and a priest for 48 years.

Robert Cornelius Croken was born in Emerald, Prince Edward Island on April 17, 1933, and entered the Jesuit noviceship at Guelph on September 7, 1953 after studies at St. Dunstan’s University. Following philosophy studies and several years teaching at Loyola High School, Montreal, he was ordained a priest on June 5, 1965.


Further studies in theology followed at Fordham University, Bronx, NY. After lecturing in theology and church history at St. Augustine’s Seminary, Toronto School of Theology, he served as Rector of Regis College where he also taught. From 1984-90, he was Rector of Ignatius College. Then, he became Director in 1991 of the Lonergan Research Institute, located at Regis College; when his term as director ended in 2001, he continued on at the LRI as a valued collaborator and writer.

Father Bob was a quiet and reflective Jesuit, an attentive listener who enjoyed good conversation. He was a calming presence in any community he lived in and was a sharp observer of province personnel and events.

There will be wake periods today, Monday, March 4, from 2-4PM at Rosar-Morrison Funeral Home, Sherbourne Street, Toronto, and at Loyola Chapel of Manresa Retreat House, Pickering, from 7-9PM (with a Prayer Service at 8PM).

The funeral liturgy will be in the Loyola Chapel at 11:00 on Tuesday, March 5, with burial at the Jesuit Cemetery, Guelph at 2:30PM that afternoon.

May your unfailing compassion, O Lord, cleanse and protect your church, and, since without you she cannot stand secure, may she be always governed by your grace. Through our Lord Jesus Christ, your Son, who lives and reigns with you in the unity of the Holy Spirit, one God, forever and ever. Amen.

Almighty God, to serve you is to reign; grant that, with the help of Saint Casimir's intercession, we may constantly serve you in holiness and justice. Through our Lord Jesus Christ, your Son, who lives and reigns with you in the unity of the Holy Spirit, one God, for ever and ever.
Posted by Archbishop Terry at 1:13 AM