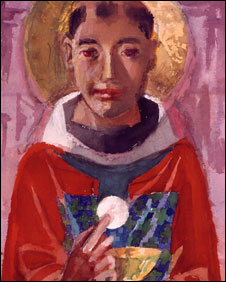 John Roberts was born in Wales to Anna and John Roberts. Although he was not a Catholic, he was taught by an elderly priest and at heart he was always a Catholic.

John went to Oxford University in England for a few years before going to study law. He then took a trip to France to have a good time. But his trip turned out to be more than fun.

It was in Paris, France, that another Englishman who was Catholic had great influence on him and John found great happiness in joining the Catholic Church.

John lost no time after this in taking steps to become a priest. He went to an English college in Spain and became a Benedictine monk.

Then his great dream of going back to England came true three years later when he and another monk were given permission to go. They knew the dangers they would face because Catholics were not welcome there, especially not priests.

In fact, they did not have long to wait before trouble began. They entered England wearing plumed hats and swords at their sides. But soon they were arrested for being priests and sent out of the country.

Father John managed to return to England again. He worked day and night to keep the Catholic faith alive during Queen Elizabeth's terrible persecution. Several times he was captured, put in prison, and exiled, yet he always returned.

The last time Father John was arrested, he was finishing Mass. This time there was no escape. When asked, he boldly said that he was a priest and a monk.

He explained that he had come to England to work for the salvation of the people. "Were I to live longer," he added, "I would continue to do what I have been doing." St. John was then condemned to death.

The night before he was to be hanged, a good Spanish lady arranged for him to have supper with eighteen other prisoners. They were also suffering for Christ's sake.

During their supper together, St. John was full of joy. Then he thought perhaps he should not show so much happiness. "Do you think I may be giving bad example by my joy?" he asked his hostess.

"No, certainly not," she replied. "You could not do anything better than to let everyone see the cheerful courage you have as you are about to die for Christ."

The next day, St. John was hanged. The crowds were so attracted by the personality of this young priest that they did not let the executioners make him suffer.

St. John Roberts was martyred on this day in 1610; an optional memorial in his native Wales is permitted today.   [http://saintscatholic.blogspot.com]

May our prayer of petition rise before you, we pray, O Lord, that, with purity unblemished, we, your servants, may come, as we desire, to celebrate the great mystery of the Incarnation of your Only Begotten Son. Who lives and reigns with you in the unity of the Holy Spirit, one God, for ever and ever.

FOLLOW-UP TO THE
ARCHBISHOP'S BENEFIT DINNER 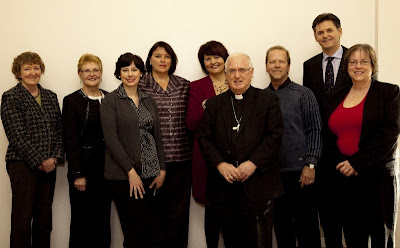 This year’s Archbishop’s Dinner was in favour of our elderly, who are supported through the excellent work on their behalf at the Centre d’Accueil Roger-Seguin in Clarence Creek and at St. Patrick’s Home of Ottawa.

On Thursday, December 6, representatives of these two institutions came to the Diocesan Centre to receive the cheques distributing the proceeds from the dinner, some $36,000 to each, which also included a contribution from the diocese’s charitable fund.

Thanks again to all who were sponsors of the dinner or attended; your generosity is much appreciated.

Next year’s Archbishop’s Dinner will be held on Wednesday, October 16.
﻿ ﻿  ﻿ 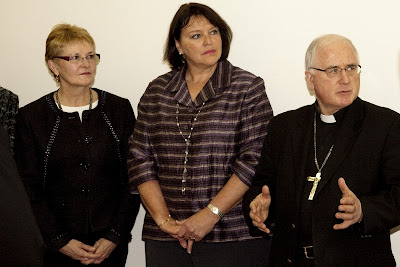 Photo credit: Robert DuBroy
Posted by Archbishop Terry at 6:15 AM