Baruch, a professional scribe, served as secretary to Jeremiah the prophet and read his message in the temple (cf. Jeremiah 36.4-10). When King Jehoiakim was angered by Jeremiah's prophecy, he had Baruch and his scrolls seized. Though the king burned the scrolls, Baruch rewrote the oracles.

With Jeremiah, Baruch was carried off to Egypt (43.6), and knowledge of his later fate has become legendary. Tradition holds that he was taken to Babylon after Nebuchadenezzar conquered Egypt.

Baruch's high character and the significant role he played in Jeremiah's life led later generations to enhance his reputation. Thus, a large number of writings were attributed to him. Roman Catholic and Orthodox Christians include one of these, the Book of Baruch, among the seven deuterocanonical writings of the Bible; Protestants call these writings the Apocrypha.

Scholars date the contents of Baruch to several eras. Compilers gathered these important writings late in the first century B.C. to rouse in their contemporaries a sense of Israel's historic roots. Though religious life had become quieter and easier, it remained in danger of being absorbed by religious and social currents.

The authors wanted God's people to experience solidarity with their ancestors from exilic times and become aware of sinful tendencies that had led to Israel's downfall in the past, which still were lurking close at hand. For the sacred authors, spiritual reflection leading to contrition laid the groundwork for hope in the future.

Mother Jerusalem had been exhorting her children in exile to fortitude and patience (Baruch 4.5-5.9). Even in exile they remained God's people Israel. Now they were being urged to look beyond present sorrows to see the joy that was coming, to put off the garment of mourning, replacing it with the robe of righteousness (“put on forever the beauty of the glory from God”).

The authors of Baruch simply used the setting of the exile as imagery to bear a message to their contemporaries. The restoration being envisaged was the messianic era in which God's children would be gathered not only from Babylon (“the east”) but from everywhere (“see your children gathered from west and east”). On that day, God would delight in all who were being saved (“God will lead Israel with joy, in the light of his glory, with the mercy and righteousness that come from him”). This fulfilment of Deutero-Isaiah's message echoes through the last verses of the selection from Baruch.

John the Baptist made an appeal similar to Baruch's to his contemporaries. Challenging them to see that God was doing something new—fulfilling what had been promised by Isaiah—John called for “a baptism of repentance for the forgiveness of sins”. While Mark and Matthew were content to speak of John as Isaiah's “the voice of one crying out in the wilderness: ‘Prepare the way of the Lord...’”, Luke extended the quotation (“every mountain and hill shall be made low”) to show that God was making it easy to return to him. In fact, God's present purpose was to offer redemption to everyone (“all flesh shall see the salvation of God”).

As this year's readings from Luke progress, we shall notice the evangelist's stress on the universality of God's saving plan and offer. For example, Luke showed that Jesus' inaugural sermon stirred up opposition when he proclaimed a ministry in the same line as the prophets Elijah and Elisha, who carried God's gracious purpose to foreigners, the widow at Zarephath in Sidon and the Syrian leper Naaman (Luke 4.24-28). Women, soldiers, tax-collectors, lepers and sinners of every stripe would have good news proclaimed to them.

Luke consciously prepared his readers for this universalist perspective by situating the ministry of John the Baptist not only within the perspective of Israel's history (“the high priesthood of Annas and Caiaphas”), but within the ambit of the history of the Roman Empire (“in the fifteenth year of the reign of Emperor Tiberius, when Pontius Pilate was governor of Judea, and Herod was ruler of Galilee ...”).

Paul assured the Philippians that God will bring all of history to its intended positive outcome at the Parousia. “I am confident of this, that the one who began a good work among you will bring it to completion by the day of Jesus Christ”. 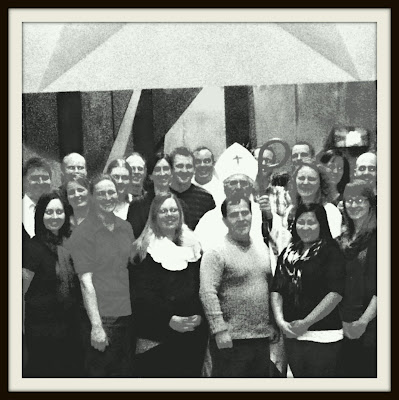 On Monday, I presided at Mass for Catholic Christian Outreach (CCO) missionaries on the Feast of one of their patrons, St. Francis Xavier.  Somehow the iPhone photo lost its colour in being transfered to my Outlook account.

Yesterday, I booked my flight for Halifax and this year's eastern version of the annual Christmas-week RISE UP! gathering (this year also in Saskatoon). I have been asked to give a conference on Sunday, December 30 in French.  To get more info re this fantastic youth assemby and to register, go to: http://cco.ca/riseup/