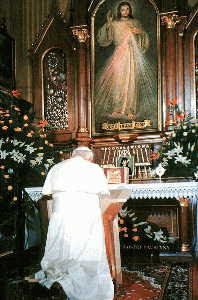 Wednesday after the Second Sunday of Easter
As we recall year by year the mysteries by which, through the restoration of its original dignity, human nature has received the hope of rising again, we earnestly beseech your mercy, Lord, that what we celebrate in faith we may possess in unending love. Through our Lord.


* * * * * *
MASS OF THANKSGIVING
FOR THE BEATIFICATION
OF BLESSED POPE JOHN PAUL II
On Sunday I arrived in Rome just after the Mass of beatification had taken place. There were present, of course, many cardinals, bishops, priests and sisters from every continent and every race.
But the city was filled with hundreds of thousands of ordinary Catholics from around the world too. I noted a large contingent from Gabon, countless groups from Poland and so on. Each group and each individual no doubt had their story to tell about how his life touched theirs.

For example, Archbishop Anthony Mancini of Halifax recalls that he was in Rome and scheduled to concelebrate Mass with Pope John Paul II the day after he learned of his father’s death back in Canada. The Holy Father comforted him movingly.

Catholic Christians from both East and West were likewise in attendance. I was privileged to the new Maronite Patriarch in the company of the Syrian Catholic patriarch.

They recalled the late Holy Father’s concern for Christians in the Middle East and his special regard for Lebanon and its manifold Christian community to whom he attributed a special vocation to effect reconciliation and peace in their homeland.

All of this prompted me to think back to my experiences of and with the new Blessed.

First of all, I recall vividly the day of Karol Wojtyla’s election as pope. Listening to the announcement on October 16, 1978 in the school library in Halifax where I was teaching, I checked his profile in the Vatican directory.

Straightaway, I told Sister Margaret Flahiff, the librarian, “Wow, he’s so young he could still be our pope in the Year 2000!” We were quite excited at the prospects of this cardinal whose first words were “Don’t be afraid!”

The enthusiasm of that day for the new pope stayed with me and grew. First when I met him in 1983 at the Jesuit general congregation and he gave me words of encouragement.

Then as I was privileged twice to join him at morning Mass in his chapel and was moved by the way I saw him pray.

Also when I went to my first World Youth Day in Paris in 1997 and saw his impact on youth and their response. This galvanized my own decision to commit myself to a special interest in young Catholics.

Finally, I met the pope as a bishop: chatting with him in his study and at table during the ad limina visit of 1999 at Castel Gondolfo. On that occasion, I brought him artificial flowers made by two groups of Micmac ladies from Shubenacadie, Nova Scotia.

There had been some rivalry between the two artistic circles. But I had joined the two sets of flowers into one bunch and the pope’s instinctive gesture on receiving flowers was to smell them. The enlarged photo of this spontaneous gesture is one that both groups treasured when it was framed and posted in the parish hall on my return. John Paul had this way of seizing the moment with a gesture that spoke volumes.

And of course, I treasure memories of his presence in Toronto at World Youth Day 2002, by which time he had become quite frail. He made a point of greeting each of us bishops individually and saying a word of encouragement.

Pope John Paul II was always larger than life: full of zeal; interested in people especially the sick, the poor and needy; a devotee of Our Lady’s and a friend of Jesus Christ—in short, a person of holiness. That’s why, despite criticisms about what some regard as failings, the Church recognizes him now as dwelling “in the Father’s House”.

This evening at 5.15 in Notre Dame Cathedral many will come to give thanks to the Lord for the beatification of this wonderful Christian and "servant of the servants of God". May each of us, in our own way, imitate him as we seek our personal path to holiness.
Posted by Archbishop Terry at 9:30 AM