St. Bernardine - 400 Years since the Arrival of the Jesuits in Canada 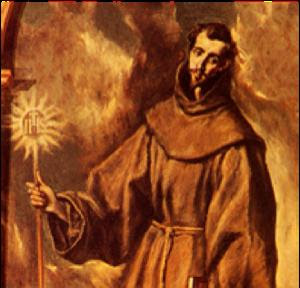 Most of the saints suffer great personal opposition, even persecution. Bernardine, by contrast, seems more like a human dynamo who simply took on the needs of the world.


He was the greatest preacher of his time, journeying across Italy, calming strife-torn cities, attacking the paganism he found rampant, attracting crowds of 30,000, following St. Francis of Assisi’s admonition to preach about “vice and virtue, punishment and glory.”

Compared with St. Paul by the pope, Bernardine had a keen intuition of the needs of the time, along with solid holiness and boundless energy and joy. He accomplished all this despite having a very weak and hoarse voice, miraculously improved later because of his devotion to Mary.

When he was 20, the plague was at its height in his hometown, Siena. Sometimes as many as 20 people died in one day at the hospital. Bernardine offered to run the hospital and, with the help of other young men, nursed patients there for four months. He escaped the plague but was so exhausted that a fever confined him for several months. He spent another year caring for a beloved aunt (her parents had died when he was a child) and at her death began to fast and pray to know God’s will for him.

At 22, he entered the Franciscan Order and was ordained two years later. For almost a dozen years he lived in solitude and prayer, but his gifts ultimately caused him to be sent to preach. He always traveled on foot, sometimes speaking for hours in one place, then doing the same in another town.

Especially known for his devotion to the Holy Name of Jesus, Bernardine devised a symbol—IHS, the first three letters of the name of Jesus in Greek, in Gothic letters on a blazing sun. This was to displace the superstitious symbols of the day, as well as the insignia of factions (for example, Guelphs and Ghibellines).

The devotion spread, and the symbol began to appear in churches, homes and public buildings. Opposition arose from those who thought it a dangerous innovation. Three attempts were made to have the pope take action against him, but Bernardine’s holiness, orthodoxy and intelligence were evidence of his faithfulness.

General of a branch of the Franciscan Order, the Friars of the Strict Observance, he strongly emphasized scholarship and further study of theology and canon law. When he started there were 300 friars in the community; when he died there were 4,000. He returned to preaching the last two years of his life, dying while traveling. (www.americancatholic.org/saintoftheday)


* * *
O God, who gave the Priest Saint Bernardine a great love for the holy Name of Jesus, grant, through his merits and prayers, that we may ever be set aflame with the spirit of your love. Through our Lord.

Friday of the 4th Week of Easter
O God, author of our freedom and of our salvation, hear the voices of those who call on you, and grant that those you have redeemed by the shedding of your Son’s Blood, may have life through you and under your protection rejoice for ever unharmed. Through our Lord.

St. Ignatius and his early companions embraced the IHS motif widely diffused by St. Bernardine.
Many Jesuit Provinces have incorporated it into their self-identity as may be seen in the logo above, adopted to underline the 400th anniversary of the arrival of the Society of Jesus in Canada at Port Royal in Nova Scotia on May 22, 2011.  Here is some information on the celebration this weekend that I made available to the Nouvelle Informateur Catholique in a recent monthly column.
THE JESUITS IN CANADA FOR 400 YEARS


On May 22, 1611, the French Jesuit Fathers Ennemond Massé and Pierre Biard landed at the small trading post of Port Royal, Nova Scotia. Their arrival was the start of the rich history of Jesuit culture in Canada that led to important contributions to Canadian history.

From mapping territory and rivers to reaching out to the Native Peoples across Canada, it is no exaggeration to say that these Jesuit ‘Blackrobes’ – priests, brothers and dedicate laymen known as “donnés”—immediately set out, as St. Ignatius had written about the Society, “to travel to various places and to live in any part of the world where there is hope of God’s greater service and the help of souls” (Jesuit Constitutions).

To some, these early Jesuits seemed like adventurers on the frontiers spreading Christianity to the ‘savages,’ forgetting that in the early Jesuit Missions, St. Jean de Brébeuf and his companions in Huronia appreciated the natives’ rich culture.

Brébeuf once wrote: “I have never met anyone of those who have come to this area, who does not frankly admit that the native people are quicker of mind than our ordinary country people.”

Among his pastoral work with the natives, Brébeuf wrote a dictionary of the Huron language and Canada’s first Christmas carol – “The Huron Carol,” or “Jesous Ahatonhia” –in the native language of the Huron/Wendat people.

Beyond work among the First Nations, the Jesuits were establishing celebrated educational institutions in Canada, much like they had already done in Europe.

In 1635 the Jesuits established a boys’ school in which they would continue to teach for 140 years.

In 1940 there were seven French-speaking, five English speaking and two bilingual colleges as well as six English high schools started by the Jesuits in Canada. I had the privilege of attending Montreal’s Loyola High School, graduating fifty years ago this year in 1961.

The Jesuits’ Ratio Studiorum (or Plan and Method of Studies) eventually became the model for 12 Jesuit colleges and 15 Jesuit high schools spread across Canada - from St. John’s to Edmonton.

For the early Jesuits these schools were not simply exercises in learning but communities where all inquiry led to a reverence for the creation of God and a fuller understanding of the God of creation.

All knowledge became part of God’s word, an insight into the humanity of Christ, and the foundation for a society of humane learning and professional competence.

Besides education, the Jesuits founded a large number of parishes as native and European settlement moved westwards. It was said in the 1960s, for example, that in the Sault- Sainte-Marie Diocese, every one of the Catholic parishes had been founded by a Jesuit.

Since the mid-1800s Canadian Jesuits have opened centres of spirituality and retreat houses where visitors can strengthen their own spiritual lives and develop habits of reflection infused with St. Ignatius’ own spiritual journey, recorded in his Spiritual Exercises.

Today’s Jesuits continue in the work of their predecessors as priests, brothers, professors, university administrators, lawyers, doctors, writers, historians, musicians, ecologists, and artists. A couple have even been named bishops!

They continue in their ministry with First Nations’ communities of Canada and send men to work in places as diverse as Brazil, Belgium, China, Dominican Republic, Haiti, India, Jamaica, Nepal, Ukraine and Zambia.

To commemorate these 400 years since the beginning of their service in Canada, Jesuit communities and apostolates across the country are planning special events for the year-long celebration.

The anniversary year begins this month with an inaugural day-long celebration at Port Royal National Historical Site in Nova Scotia, on May 22nd, 2011 where Halifax Archbishop Anthony Mancini will preside at the Jubilee Mass.

Other celebrations to mark this significant anniversary will take place across the country, determined by the local Jesuit community. Watch for a celebration near you.