Collect for Thursday after the Second Sunday of Easter

O God, who for the salvation of the world brought about the paschal sacrifice, be favourable to the supplications of your people, so that Christ our High Priest, interceding on your behalf, may by his likeness to ourselves bring us reconciliation, and by his equality with you free us from our sins. Through our Lord. 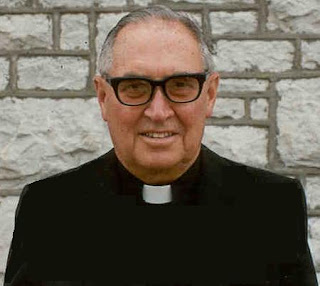 When I was a high school student considering entering the Jesuits, the man who assisted me in applying to the Order was Father Emmett J. McKenna, the school chaplain.

Father McKenna passed away on Sunday, May 1 at Rene Goupil House, the Jesuit Infirmary, Pickering; he was in the 91st year of his life, 69th year of religious life and 56th of the priesthood. His funeral will take place this morning at St. Ignatius Chapel, Manresa Retreat House in Pickering.

In keeping with my character, I was the last person to approach him about going to the Novitiate in Guelph in 1961 (I did the psychological tests in June, a few days before the Grad Dance and Graduation Ceremony).

Learning in July that I had been accepted to enter on August 14, I took a short trip from Montreal to visit relatives in the New York-New Jersey area (Bayonne NJ, Staten Island NY). Father McKenna was completing his degree in counseling at Fordham that summer so we had a chance to visit. A highlight of that was to attend with him a Broadway show, Bye, Bye Birdie! That and the Rockettes show at Radio City Music Hall were eye-openers for a teenager from Montreal.

Emmett McKenna was born on August 22, 1920 in Montreal, Quebec; he entered the Jesuits in 1942. Father’s ministry for many years was teaching High School, in Montreal, Kingston and Winnipeg. He also served at St. John Brébeuf Parish, Winnipeg, as Assistant Director of Martyrs Shrine, Midland, director and later chaplain at the Jesuit Infirmary.

Father McKenna and I kept in touch over the years and he was always an encouragement to me whenever we met, except in the last few years when his memory failed him. I will offer Mass for the repose of his soul this evening.