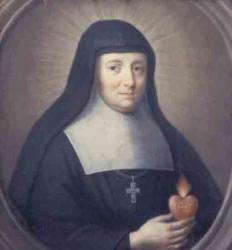 St. Jane Frances de Chantal (b. 1572 Dijon - d. Moulins 1641)
On Saturday afternoon, Frere Jean-de-la-Croix drove me the 35 kilometers into Moulins, the see city to see the gorgeous tryptik in the cathedral and to visit the Musee de la Visitation presided over by Monsieur Picaud, a man totally devoted to the legacy of the Visitation charism in the city where St. Jane Frances de Chantal died on December 13, 1641. 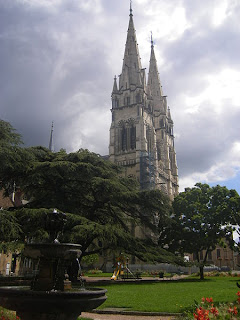 The Story of Jane Frances de Chantal
At the age of sixteen, Jane Frances de Fremyot, already a motherless child, was placed under the care of a worldly-minded governess. In this crisis she offered herself to the Mother of God, and secured Mary’s protection for life.

As the loving and beloved wife of the noble Baron de Chantal, she made her house the pattern of a Christian home. But God had marked her for something higher than domestic sanctity. Two children and a dearly beloved sister died, and then, in the full tide of their prosperity, her husband’s life was ended by an accident, through the innocent hand of a friend, when a small group went hunting in the forest.

For seven years the sorrows of her widowhood were increased by ill usage from servants and inferiors, and the cruel importunities of those who urged her to marry again. Harassed almost to despair by their entreaties, she branded on her heart the name of Jesus, and in the end left her beloved home and children, to live for God alone. It was on the 19th of March, 1609, that Madame de Chantal bade farewell to her family and relatives.

Pale and with tears in her eyes, she passed around the large room, sweetly and humbly taking leave of each one. Her son, a boy of fifteen, used every entreaty, every endearment, to induce his mother not to leave them, and finally flung himself passionately across the doorsill of the room. In an agony of distress, she passed over the body of her son to the embrace of her aged and disconsolate father. The anguish of that parting reached its height when, kneeling at the feet of the venerable old man, she sought and obtained his last blessing, promising to repay his sacrifice in her new life by her prayers.

Well might Saint Francis de Sales call her “the valiant woman.” She founded under his direction and patronage the great Order of the Visitation. Sickness, opposition and want beset her, and the deaths of children, friends, and of Saint Francis himself followed, while eighty-seven houses of the Visitation rose under her hand. Nine long years of interior desolation completed the work of God’s grace in her soul.

The Congregation of the Visitation, whose purpose was to admit widows and persons of fragile health, not accepted elsewhere, was canonically established at Annecy on Trinity Sunday of 1610. The Order counted thirteen houses already in 1622, when Saint Francis de Sales died; and when the Foundress died in her seventieth year, there were eighty-six. Saint Vincent de Paul saw her soul rise up, like a ball of fire, to heaven. At her canonization in 1767, the Sisters in 164 houses of the Visitation rejoiced.

Given that many Visitation monasteries have had to close in recent decades, M. Picaud has very successfully lobbied the sisters to donate their heirlooms (religious, devotional, cultural and of other historical and social types) to the Musee de la Visitation, which he and associates have persuaded the civic officials to accommodate in a 17th century building (modernized for ventilation, lighting and security) to house the more than 1000 pieces he has already assembled. 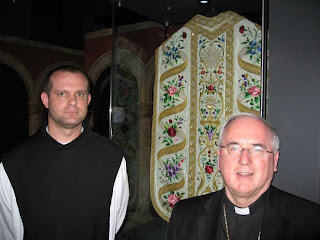 Though it is sad that the lack of recruits to continue the contemplative vocation, here is the legacy of these sisters: here is how they lived, this is what they spent time on and what they valued (needlework and brocading of vestments, treasuries of religious artifacts, reliquaries, sacred vessels, etc).

So many are the items in the Museum that it is impossible to view them all, so M. Picaud and helpers arrange an exposition each year to show off their treasures. After the visit, we went to the exposition (the photo is of Frere Jean-de-la-Croix and myself before one of the beautiful chasubles for Holy Mass (of which there were dozens).

Further information may be found at: musee.visitation@free.fr and/or www.musee-visitation.eu.
Posted by Archbishop Terry at 3:16 PM