Vankleek Hill Retreat to Close; Off to Quebec City; More on the Year of the Priest

Van Kleek Hill Retreat Centre Sold
This past Sunday, Abbe Daniel Berniquez and I shared breakfast with the Sisters of Sainte-Marie de Namur (Belgium) who began their presence in Canada at their convent in Vankleek Hill, a hour's drive east of Ottawa in 1886. 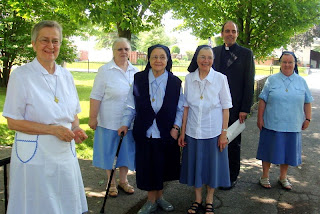 Recently it was sold to an enterprising woman from the village who had been contem-plating building a spa to encourage visits to the town. She felt developing the large complex was more economical than building from scratch. The transition date is August 13, at the end of the last retreat that will be given in their residence for the Sisters themselves. 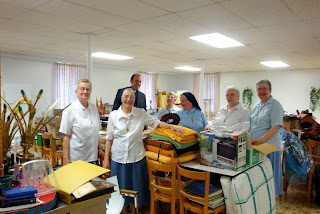 Now the Sisters, besides packing for their own move to a retirement complex Buckingham, QC or a residence in downtown Ottawa, are preparing for a garage sale of all that has been acquired in close to a century and a quarter. 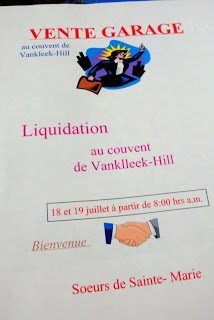 Chapel Furnishings to Aid Paroisse St. Paul, Aylmer, QC Just as the Year of St. Paul was drawing to a close, arsonists struck at St. Paul's Church, a striking, basilica-size church in the Aylmer section of the Gatineau Archdiocese. The church was left almost entirely destroyed (the stone statue of St. Paul survived with large amounts of soot!) As the parishioners make do with temporary arrangements, the Sisters have offered the furnishings of their beautiful chapel to the parish for interim or permanent use. 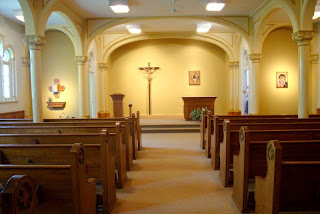 DRIVING TO QUEBEC CITY Today, I am driving to Quebec for the Emmanuel Community's gathering on the family. I will be home on Sunday; blogging will be light in the interim. Meantime, another excerpt from Pope Benedict's letter to priests for the Year of the Priesthood.

This selection from the Holy Father's Letter contains many quotations from the Cure of Ars, which helps us grasp the themes for our reflection this year:

Saint John Mary Vianney taught his parishioners primarily by the witness of his life. It was from his example that they learned to pray, halting frequently before the tabernacle for a visit to Jesus in the Blessed Sacrament. “One need not say much to pray well” – the Curé explained to them – “We know that Jesus is there in the tabernacle: let us open our hearts to him, let us rejoice in his sacred presence. That is the best prayer”. And he would urge them: “Come to communion, my brothers and sisters, come to Jesus. Come to live from him in order to live with him… “Of course you are not worthy of him, but you need him!”. 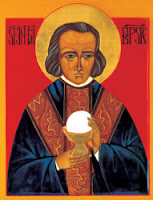 This way of educating the faithful to the Eucharistic presence and to communion proved most effective when they saw him celebrate the Holy Sacrifice of the Mass. Those present said that “it was not possible to find a finer example of worship… He gazed upon the Host with immense love”.

“All good works, taken together, do not equal the sacrifice of the Mass” – he would say – “since they are human works, while the Holy Mass is the work of God”. He was convinced that the fervour of a priest’s life depended entirely upon the Mass: “The reason why a priest is lax is that he does not pay attention to the Mass! My God, how we ought to pity a priest who celebrates as if he were engaged in something routine!”. He was accustomed, when celebrating, also to offer his own life in sacrifice: “What a good thing it is for a priest each morning to offer himself to God in sacrifice!”.

This deep personal identification with the Sacrifice of the Cross led him – by a sole inward movement – from the altar to the confessional. Priests ought never to be resigned to empty confessionals or the apparent indifference of the faithful to this sacrament. In France, at the time of the Curé of Ars, confession was no more easy or frequent than in our own day, since the upheaval caused by the revolution had long inhibited the practice of religion. Yet he sought in every way, by his preaching and his powers of persuasion, to help his parishioners to rediscover the meaning and beauty of the sacrament of Penance, presenting it as an inherent demand of the Eucharistic presence.

He thus created a “virtuous” circle. By spending long hours in church before the tabernacle, he inspired the faithful to imitate him by coming to visit Jesus with the knowledge that their parish priest would be there, ready to listen and offer forgiveness. Later, the growing numbers of penitents from all over France would keep him in the confessional for up to sixteen hours a day.

It was said that Ars had become “a great hospital of souls”. His first biographer relates that “the grace he obtained [for the conversion of sinners] was so powerful that it would pursue them, not leaving them a moment of peace!”. The saintly Curé reflected something of the same idea when he said: “It is not the sinner who returns to God to beg his forgiveness, but God himself who runs after the sinner and makes him return to him”. “This good Saviour is so filled with love that he seeks us everywhere”.
Posted by Archbishop Terry at 9:44 AM