Arrival in France, at Sept-Fons: Preparations for Ordinations on the Feast of St. Mary Magdalene

The overnight flight on Air Canada from Pierre Elliott Trudeau-Dorval to Charles de Gaulle-Paris went swiftly (only five and a half hours). Two brotheres from Sept-Fons met me: Frere Joseph (a former diocesan priest of Paris, ordained in 1995, who has been at the abbey for five years) and Frere Bernard (a lay brother from Senegal, who works on the farm and has been in the Trappist way of life for seven years).

Traffic leaving Paris was full of bottlenecks as we left at the height of the morning rush hour, so it took us until 3PM before getting to the Abbaye, where I was warmly greeted by my friend Frere Nathanael Vanhaelemeesch from my 1994-95 sabbatical year at the Ecole Biblique, whom I will ordain a priest tomorrow.

In no time Dom Patrick Olive arrived on the scene to welcome me back (I had been here twice before). He has been abbot since 1980 and is credited with a modern form of re-founding of Sept-Fons in the wake of post-conciliar uncertainty about monasticism.

He has encouraged a strict return to the Trappist manner of life (austere, beautiful choir and liturgy), along with up-to-date helps to the contemplative vocation (cell phones and computer links to assist with the complexities of modern life).

One gets the impression on entering the guest house of a strong sense of vigour in the monastic tradition that speaks to young men from all across Europe (the community currently numbers close to 80, most of them younger men). There are sister abbeys in the People's Republic, the Holy Land and the Czech republic with all the particular challenges these pose.

The Prior, Frere Jeremie, had suggested we exit the autoroute at the road that leads to Nevers, where St. Bernadette Soubirous died in the odor of sanctity. The Grillade Courtepaille served us all steaks with frites and a decent wine of the region (Burgundy). The monks are vegetarian but have permission to eat meat when with visitors or travelling away from home.

But before lunch we stopped to say the midday prayer (sext) in the Church of St. Leger (a martyr bishop) in Pougues-les-Eaux (we had recited tierce while weaving through Parisian traffic jams and they would recite none as I nodded off for a mid-afternoon snooze prior to our arrival at Sept-Fons). 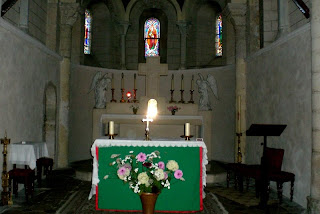 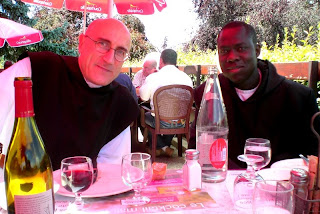 All day today there have been preparations for tomorrow's ordinations; I am a bit nervous about all the singing required of me but I am sure they will overlook my limitations in this regard (everyone has been most kind).
Posted by Archbishop Terry at 10:08 AM