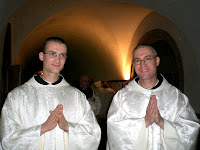 This morning we celebrated the Feast of St. Bridget of Sweden (with St. Catherine of Siena and St. Theresa Benedicta of the Cross [Edith Stein]), one of the female co-patrons of Europe (the male co-patrons are St. Benedict and Sts. Cyril and Methodius).

Pere Nathanael celebrated his Mass of Thanksgiving at the Coventual Mass (Lauds integrated with the Eucharist) and gave a brief reflection on the priest-monk's call, basing himself on two sayings of Our Lord, "Come, follow Me" and "This is My Body". He was assisted by Frere Jerome, ordained a deacon yesterday.

Mysteriously, Jesus calls a small group to follow him, who, humanly speaking, have all the limitations we can image in a man: laziness, hesitation to believe, able to deny and to betray their Lord. Yet, the monk is invited to this kind of following, ready to devote himself to personal intimacy with the Lord, to adoration and to intercession.

He does so as a monk even in the darkness of the night, symbolizing the monk's willingness to enter into that darkness that surrounds man in his unbelief, senselessness and looking for God in the wrong places. And, from within the company of disciples (and from among monks), the Lord chooses some to represent him by renewing the Lord's one pure and perfect sacrifice for the salvation of the world. 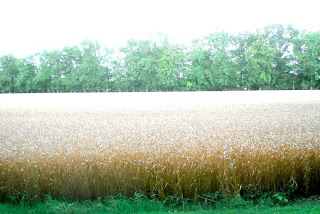 Yesterday, after the Mass we had a lovely luncheon, a feast of Chinese cuisine. Then, after none, I went to visit with Nathanael and Jerome's families, as well as other visitors, in the abbey gardens.

As Nathanael comes from Flanders, a priest reporter from Belgian Radio and Television (BRTV) interviewed me about my friendship with Nathanael from our time together in the Holy Land in 1994-1995, as he was studying at Hebrew University in Jerusalem and I was on sabbatical at the Ecole Biblique et archaeologique francaise where we would meet to go on the biblical excursions to the Negev, Jordan and Upper Galilee, as well as on the Sunday trips guided by the late Marcel Beaudry to biblical sites in the country and on Tuesday with Father Jerome Murphy-O'Connor in the Holy City.

After supper, I wandered through the grounds of the abbey, through the orchards, corn fields and the fields of grain "white for the harvest" (cf. John 4:35), a hopeful image for what we celebrated in these ordinations and our hopes for the future.

On the grounds there are several shrines to Our Blessed Mother, including this one in the garden of the cloister: 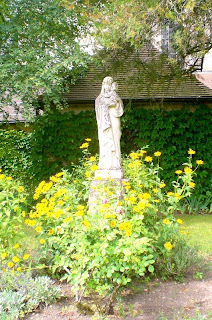 Posted by Archbishop Terry at 4:41 AM