Last evening, Dom Patrick gave a dinner so I could get to meet the local bishop of the Diocese of Moulins and his vicar general who was on retreat in the Abbey this week. 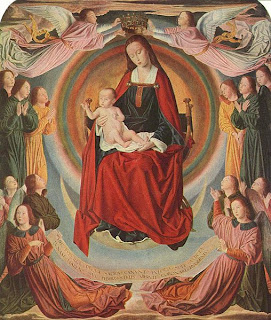 It was a delightful evening. The bishop is a blogger and has been at it since mid-2008 (www.pascalroland.blogspot.com).

At the end of the meal, I presented the bishop with a booklet put out in 1994 by the Friends of Notre Dame Cathedral Basilica illustrating the treasures of our cathedral and he gave me a miniature version of a triptych by the Maitre de Moulins (centre piece illustrated at left), now generally identified with the artist Jean Hey (1475-ca. 1505) an Early Netherlandish painter working in France and the Duchy of Burgundy, and associated with the court of the Dukes of Bourbon. I hope to see it up close on a visit to Moulins tomorrow afternoon. Parallels with Ottawa's cathedral include the name Notre-Dame and its status as a national historical site.

Father Macaire celebrated a Mass of Thanksgiving this morning, the Votive Mass of the Immaculate Heart of Mary; the homily gave a wonderful interpretation of Mary's extraordinary involvement with Our Lord, from the moment of His conception in her womb until his death on Calvary.

He mentioned the particular role that Mary has in Jesus' priestly life and, because Jesus commended her to the Beloved Disciple and the Beloved Disciple and all others to her, that she shares in a marvellous way in the life and spirituality of priests though she was not called to be a priest; her dignity lay in her role as the Mother of God (the Theotokos the term by which Eastern Christians honour her). 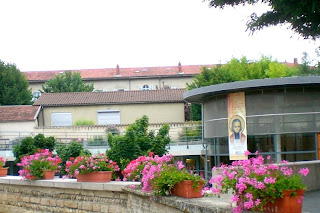 Speaking of the Priesthood, Freres Bernard and Matthias accompanied me to a day-long outing to Ars-sur-Formans, the village called to holiness by the saintly Cure of Ars, Saint Jean Marie Baptiste Vianney.

The Welcome Centre pictured above was already quite involved in celebrating a Jubilee Year marking the 150th anniversary of the death of the Patron of Parish Priests (August 4, 1859); it began December 8, 2008 and was to conclude November 1, 2009.

Pope Benedict XVI, however, has added a greater emphasis by declaring a Year of Priests (June 19, 2009-June 11, 2010) and promising to designate St. John Mary Vianney patron of all the world's priests (the date when this will happen has not yet been indicated).

Today's visit to Ars, though brief, was very uplifting for me and my companions. More on this tomorrow. Meantime, here is the reliquary chapel where the heart of St. John is encased; his body is in the nearby basilica, discovered to have been preserved incorrupt when the casket was opened in 1904. 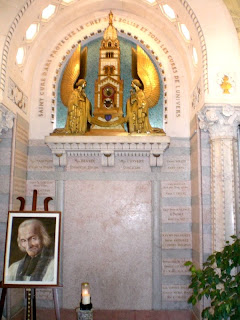 On my return to Sept-Fons this evening from the pilgrimage, Dom Patrick asked me to speak to the Chapter before Compline about my new ministry in Ottawa (I had spoken to them about my ministry in Nova Scotia on an earlier visit).

After a brief overview of the joys and challenges, there were a few questions: among them, one about ministry to the Native Peoples, whether the church enjoys freedom in Canada's public life in Canada and the degree to which Canada's saints and blesseds are appreciated/honoured.
Posted by Archbishop Terry at 3:48 PM