"God So Loved the World": Sunday Lent 4B - Visit of Cardinal Oswald Gracias

JOHN 3:16—“GOD SO LOVED THE WORLD...”
[Texts: 2 Chronicles 36.14-17a, 19-23; [Psalm 137]; Ephesians 2.4-10; John 3.14  -21]
Early in his pontificate, Blessed Pope John Paul wrote an encyclical letter Dives in Misericordia that meditated on the love of “God who is rich in mercy”.  It is among the most profound of the late Holy Father's teachings, one that very much merits prayerful consideration.
The abundance of God's mercy is likewise the theme of the epistle to the Ephesians.  It explores how the effects of divine love in human hearts and lives can transform every human institution, notably marriage and family life.

Paul's reflection regards God's love and mercy at work through a gift of divine favour towards sinful humanity (“for it is by grace you have been saved”).  Paul stressed that the resurrection is the completion of God's love manifest on the cross.

An analogous ‘resurrection’ takes place in the one who believes in God's saving deed.  God brings those who had been dead in their sins back to life with the Risen Christ.  They are already seated with Christ in the heavenly places.  “This is not your own doing; it is the gift of God” at work in history and in human lives that continues even today.

The summary of the gospel that is held up on posters at sporting events and other public gatherings—John 3:16—closes Jesus' discussion with Nicodemus who came to Jesus secretly by night.  He had begun by complimenting Jesus, saying that no one could do his deeds apart from God's presence.

Jesus then spoke about being born anothen (a Greek word meaning “from above” or “again”) and about the Spirit that, like the wind (the Greek word pneuma means both “wind” and “spirit”), blows where it chooses.  All this left Nicodemus baffled.

Jesus suggested that when people come to him, the Light of the World, their comprehension or lack of understanding reveals the degree of their sincerity.  Jesus' ultimate enigmatic teaching referred to an incident in the Book of Numbers (21.8-9) that anticipated his elevation on the Cross:

Just as Moses “lifted up” a bronze serpent in the wilderness and those who looked on it were saved from snake-bite, so Jesus would be raised on the cross to save from the power of sin all who look on him with faith.  As God had provided a remedy in the desert for a deadly affliction, so God had provided a remedy for sin which leads to alienation from God and spiritual death.

The word translated as “lifted up” has a double meaning in both Hebrew and Greek: “lift up” and “exalt”.  Though people might see Jesus' crucifixion on the cross as shameful, in fact, God—in lifting Jesus up on the cross—was exalting him.

For the Cross is but one moment in the dynamic process that includes Jesus' Passion, death, resurrection and ascension.  And to those who can see with eyes of faith, the Paschal Mystery is God's great act of love for the world (“God so loved the world...”).

Today's Old Testament selection presents the only reading from the Books of Chronicles found in the 3-year cycle of Sunday lectionary readings.  This may be due to a perception that these writings repeat much of what is found in the Books of Kings.  Yet, a close reading of the Chronicler's work reveals an astute and creative theological mind.

Taking stock of the history of and showing God's providence guiding it, the Chronicler argued that should look to God with confidence despite an ever-changing world.

This passage serves as conclusion to the 2-volume work, showing how the sinfulness of all led to the Babylonian Exile (a theme found as well in the psalm response).

While some in might see impersonal forces at work in the Exile, the sacred author believed that, as Jeremiah had foretold, God had been acting through the King of the Chaldeans to let the land undergo a Sabbath rest of seventy years from wickedness and injustice.

Later, God stirred up Cyrus, King of Persia, to grant reprieve and permission to return to to build God a new dwelling there.  Like the readings from Ephesians and the words of Jesus in the gospel, the closing refrain of the Chronicler embodies the Lenten message which is one pregnant with hope. 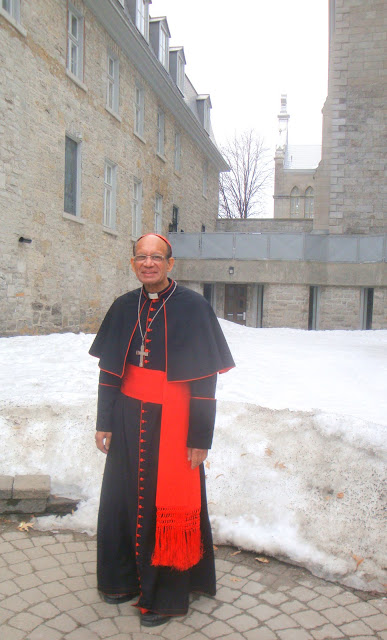 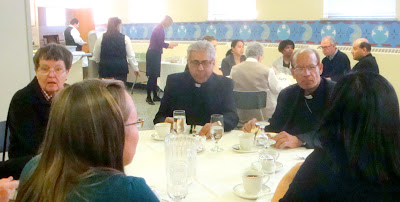 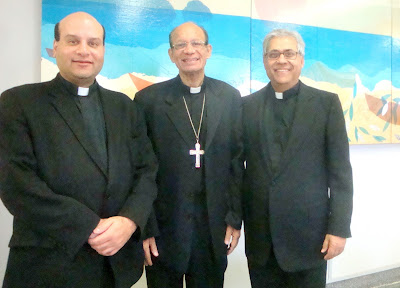 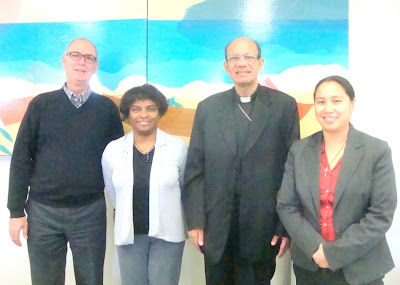 On Tuesday, Cardinal Gracias presided at the 12:15 Mass at Notre Dame Cathedral and greeted the clergy and faithful afterwards. (Photos thanks to ) 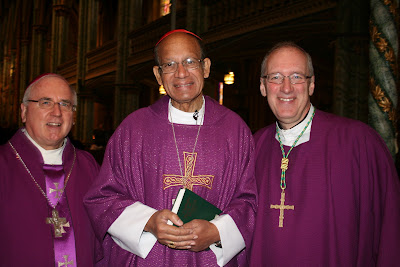 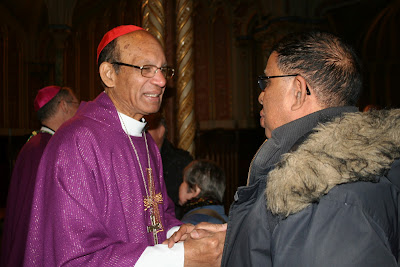 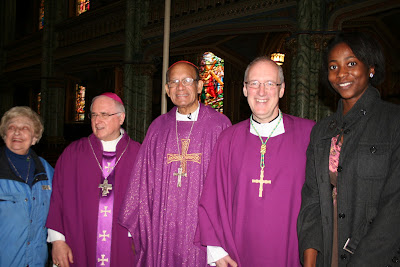 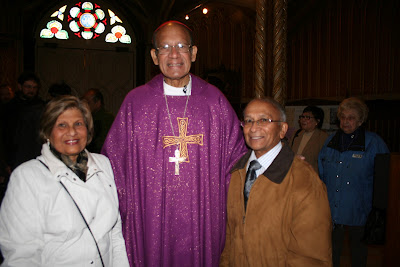 The Archbishop of Bombay visited briefly early this week prior to speaking engagements in and the area. We have gotten to know each other from our service on the Vox Clara Commission.
His Eminence celebrated Mass in the Diocesan Centre Chapel on Monday and joined our diocesan staff and Catholic tenants (CCO, CNEWA, D&P, the Holy Land Commissariat) for luncheon in the dining-room  (several photos):
Posted by Archbishop Terry at 2:27 PM