THE HOLY NAME OF JESUS

This optional memorial that may be celebrated today has become, in the revision of the Liturgical Calendar of the Society of Jesus, its Solemn Feast Day.

This feast day observance has been transferred from January 1, the gospel of which features the circumcision and naming of the Child Jesus, even as its primary focus is now on the Divine Motherhood of the Blessed Virgin Mary.

January 3rd, Feast of the Holy Name of Jesus

In the Extraordinary Form, the feast of the Holy Name is of the “second class” (making it equal to Sundays throughout the year, complete with the recitation of the Gloria and the Credo), but in the Ordinary Form the memorial of the Holy Name was not even included in the calendar after 1970. Happily, the feast was re-instituted as an optional memorial by Bl. John Paul II – we should think that the Name deserves at least this much honour!

In fact, the Feast of the Holy Name of Jesus is of comparatively recent origin, not having become popular until the Franciscan St. Bernadine of Siena preached this devotion in the 15th century.

It has been celebrated in numerous ways in the Latin rite – at first the feast was kept on the Second Sunday after Epiphany, then it was moved to the Sunday after the Octave of Christmas (the Sunday between January 2nd and 5th).

It is desirable that this feast be celebrated closer to the day in which Christ historically received his name, the day of his circumcision (eight days after his birth, January 1st), and thus the feast is kept on January 3rd in the Novus Ordo.

The insignia “IHS" is associated with this feast, but what does IHS mean? Why is IHS a sign for the Name of Jesus?

The name “Jesus”, in Greek, is written ιησους which is transliterated as “ihsous” and pronounced iēsous. This is the Holy Name as it was written in the Gospels.

However, in Hebrew, the name “Jesus” is written ישוע which is transliterated as “yeshu‘a” and pronounced yeshūa.

Finally, in Latin, the Holy Name is written Iesus which gives us the English “Jesus”, since the “j” often replaces the “i” at the beginning of a word (as well as between vowels).

The insignia “IHS” comes from the Latinized version of the Greek ιησους, [In Greek capitals this would be ΙΗΣΟΥΣ or IHSOUS in Latin letters] taking the first three letters in capitals IHS(ous)….

This is the true meaning of IHS, it is the first three letters of the Greek spelling of the Holy Name of Jesus. The insignia is nothing more (and nothing less) than the symbol of the Holy Name.

It is popular legend that the IHS stands for the Latin phrase Iesus Hominum Salvator, “Jesus the Savior of (all) Men”. While this is a fine devotion, it is not historically accurate….

Still, although historically inaccurate, there is certainly nothing wrong with seeing in this insignia a testimony to the truth that there is no other name under heaven given to men, whereby we must be saved (Acts 4:12). Most certainly, Jesus alone is the Saviour and without his grace we can neither attain nor even desire everlasting life.

In Hoc Signo vinces – In this sign, you will conquer

After three nails were added under the insignia (together with a cross above), some noticed that the inscription now contained a “V” below the IHS – so that we see IHSV. In this form it was adopted by St. Ignatius as the symbol of the Jesuits. 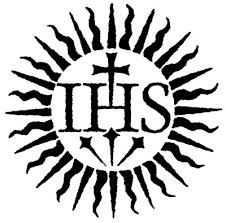 ﻿
IHSV was interpreted to mean In Hoc Signo Vinces, “In this sign, you shall conquer”.

It was taken as a reference to the victory which Constantine won against Maxentius at the Milvian Bridge on 28 October 312. Before the battle, the future Emperor saw a sign in the sky (probably the Greek chi-rho X-P, the symbol of “Christ”) and heard the words εν τουτω νικα, which is Greek for “In this [sign], you shall conquer”.

The phrase was translated into Latin and it was noticed that the first letters of each word added up to IHSV – thus was born the legend that IHS stood for Constantine’s vision and the Christianization of Rome.

O God, who founded the salvation of the human race on the Incarnation of your Word, give your peoples the mercy they implore, so that all may know there is no other name to be invoked but the Name of your Only Begotten Son. Who lives and reigns with you in the unity of the Holy Spirit, one God, for ever and ever.
Posted by Archbishop Terry at 6:14 AM