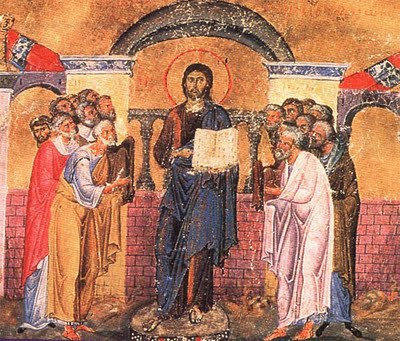 ﻿
Each part of Luke's two-volume work begins with a literary prologue—addressed to Theophilus—following conventions found in historical and biographical writings of the day (cf. Acts 1.1-2). Like a writer's preface today, prologues indicated something about the author's predecessors; the work's subject matter, plan and arrangement; the author's name, qualifications and the official addressee(s).

Still, Luke does not tell us his name, mention Jesus by name or indicate the scope of his work. Origen thought that Theophilus, which means ‘friend of God,’ referred to any reader open to God's message. More likely, however, he was a wealthy Christian who served as the patron for the preparation and publication of Luke-Acts.

The evangelist's statement of purpose speaks of others having tried to give an “orderly account” of the “events that have been fulfilled among us”. And of Luke's own try at an orderly account, so that Theophilus and subsequent readers might know “the truth concerning the things about which you have been instructed”. The point Luke stressed about ‘the truth’ may also mean ‘security’ or ‘assurance’—i.e., something on which one's faith may be safely grounded.

Jesus' synagogue sermon at Nazareth, ‘where he had been brought up’, illustrates how Luke intends us to understand what he had in mind in his prologue. From Mark's gospel, one of Luke's sources, we learn of the negative response to Jesus' address in Nazareth (Mark 6.1-6a). In Mark's chronology, this visit home took place well after had Jesus begun the Galilean phase of his career.

Luke does not deny Mark's chronology. He even has Jesus' townspeople refer to miracles that Jesus had worked in Capernaum (“Do here also in your hometown the things that we have heard you did at Capernaum” [4.24]). But Luke made this episode the frontispiece of Jesus' whole ministry because it manifested key gospel themes, particularly that Jesus fulfils the prophets by evangelizing outcasts and declaring the “year of the Lord's favour”.

Leviticus had prescribed, at 50-year intervals, times of “jubilee” when debts would be forgiven and lost land holdings regained by the poor. Isaiah foretold this would be effected by the Spirit working through the coming “Servant of the Lord”. Jesus declared that these promises had found their fulfilment “today ... in your hearing”.

In the portion of this encounter read next Sunday, Jesus says that God's outreach extends to Gentiles, an assertion that evoked so hostile a reaction from his compatriots that it foreshadowed his death and resurrection. However, God's designs are not thwarted by human resistance.

As in the paradox of the cross, God's compassion—far from being extinguished by hardness in human hearts—continues to spread in ever-widening circles. For God seeks out every human heart “to the ends of the earth” (Acts 1.8).

Rejoicing in God's favour is also a theme in the first reading. Nehemiah described the circumstances of God's people during the Persian Empire's annexation of Israel. The Temple had not yet been rebuilt, the office of king had disappeared and the land was occupied by a foreign power. Only one ‘institution’ remained that no one could suppress: reading and adhering to God's Torah handed down by Moses.

Celebrating a time of renewal and the birth of ‘Judaism’, Ezra the priest solemnly proclaimed God's Law. The people were united in their commitment to it. It mattered little that Jerusalem's ramparts had not yet been erected, “for the joy of the Lord is your strength”.

The analogy of the body—which is “one” despite its “many” members—was a commonplace in antiquity. Paul used it to challenge the Corinthians to transcend rivalries over which spiritual gifts or offices in the church were more important. Instead of partiality, each was asked to see that “in the one Spirit we were all baptized into one body ... and we were all made to drink of one Spirit”.


To see the infinite pity of this place,
The mangled limb, the devastated face,
The innocent sufferers smiling at the rod,
A fool were tempted to deny his God.

He sees, and shrinks; but if he look again,
Lo, beauty springing from the breast of pain!—
He marks the sisters on the painful shores,
And even a fool is silent and adores.


Mother Marianne Cope is one of the new saints canonized October 21 by Pope Benedict XVI. The new saint from New York was born Maria Anna Barbara Koob on January 23, 1838 in Heppenheim in the Grand Duchy of Hesse (modern-day Germany). When she was just a year old, her family emigrated to the United States—settling in the farming community of Utica, New York.

From early childhood Maria Anna was attracted to religious life. Attending school at the Parish of St. Joseph, she admired the sisters who had devoted their lives to Christ. However, her vocation was to be delayed: Her father became an invalid when Maria Anna was in eighth grade, and she went to work in a factory to help support her family. At age 24, when her younger siblings were old enough to assume responsibility for the family and after her father had died, Maria Anna entered the Sisters of the Third Order Regular of Saint Francis, based in Syracuse, New York.

After one year in the novitiate, Maria Anna received the habit of the Franciscan sisters and with it, her new name: Sister Marianne. She became a schoolteacher, then a principal, at newly established schools for German-speaking immigrants in the region.

By the 1860s, Sister Marianne had been elected to the Governing Council of her religious order; and in that role, she was instrumental in opening two new hospitals in Central New York. She was appointed by the Superior General to direct St. Joseph’s Hospital, the first public hospital in Syracuse, and she served in that role from 1870-1877.

Unlike other hospitals of the time, the Franciscan hospitals stipulated in their Charter that medical care was to be provided to all, regardless of race or creed. She helped to further patients’ rights, insisting in a letter of negotiations with the Medical College at Syracuse University that it was the right of the patient in each and every case to decide whether or not he or she wished to be brought before medical students. Sister Marianne was often criticized for accepting into treatment “outcast” patients such as alcoholics, who were spurned by hospitals at the time; but she was well-known and loved among New Yorkers for her kindness, wisdom and down-to-earth practicality.

In 1883, Mother Marianne—by that time the Provincial Mother in Syracuse—received a letter from a Catholic priest asking for help managing hospitals and schools in the Hawaiian Islands, mainly caring for leprosy patients. She responded enthusiastically, writing,

“I am hungry for the work and I wish with all my heart to be one of the chosen ones, whose privilege it will be to sacrifice themselves for the salvation of the souls of the poor Islanders…. I am not afraid of any disease; hence, it would be my greatest delight even to minister to the abandoned ‘lepers’.”

With six other Sisters of St. Francis, Mother Marianne arrived at Honolulu in November 1883. The sisters would manage and serve at the Kaka’ako Branch Hospital on Oahu, a receiving station where Hansen’s disease (leprosy) patients from throughout the Hawaiian Islands were sent to prevent further spread of the disease. Within two years, the sisters had cleaned the hospital and treated the 200 patients, making major improvements in living conditions; and in 1905 they founded the Kapi’olani Home, a residence for the daughters of leprosy patients, within the walls of the hospital compound. Fear of the disease had made public officials unwilling to care for the close relatives of those afflicted by the disease; only the sisters would welcome them and offer the home and education that these girls needed.

In January 1884, Mother Marianne met Fr. Damien de Veuster, who would become known as the “apostle to the lepers.” Two years later, after Father Damien had been diagnosed with Hansen’s disease, the Church and the Government were afraid to welcome him; only Mother Marianne offered hospitality, after hearing that his condition had made him an outcast. In 1888, in the last months of Father Damien’s life, Mother Marianne became his caretaker—promising him that she would continue to care for the patients at the Boys’ Home at Kalawao which he had founded.

After Father Damien’s death Mother Marianne, with Sr. Leopoldina Burns and Sr. Vincentia McCormick, cared for 103 girls at the Bishop Home for Girls, and operated the Home for Boys. Her cheerful countenance was an encouragement to the children and to the religious sisters in her order. Never fearful that she would contract leprosy herself, she said,

“God giveth life; He will take it away in His own good time. Meanwhile it is our duty to make life as pleasant and as comfortable as possible for those of our fellow-creatures whom He has chosen to afflict.”

Mother Marianne Cope, O.S.F., never contracted leprosy. She and her sisters were honored in the poem (above) written by Robert Louis Stevenson in 1889. She died of natural causes on August 19, 1918, and was buried at the Bishop Home.

On April 19, 2004, Pope John Paul II issued the decree officially naming her Venerable. She was among the first group of people to be beatified by Pope Benedict XVI, and is now often referred to as Blessed Marianne of Molokaʻi.

Her feast day (January 23) is celebrated by her Congregation, as well as by the Diocese of Honolulu and the Diocese of Syracuse. With her canonization her feast day should be celebrated and commemorated by all American Catholics; precise details are expected. [Since January 22 in the USA is observed as a Day of Prayer for the Legal Protection of Unborn Children, the Deacon-Martyr St. Vincent is kept on January 23; choosing a date for St. Marianne Cope will be determined later.]

Posted by Archbishop Terry at 5:41 AM