FEAST – THE CONVERSION OF ST. PAUL THE APOSTLE
O God, who taught the whole world through the preaching of the blessed Apostle Paul, draw us, we pray, nearer to you through the example of him whose conversion we celebrate today, and so make us witnesses to your truth in the world. Through our Lord Jesus Christ, your Son, who lives and reigns with you in the unity of the Holy Spirit, one God, for ever and ever.


AN OTTAWA OBSERVANCE
IN THE WEEK OF PRAYER
FOR CHRISTIAN UNITY 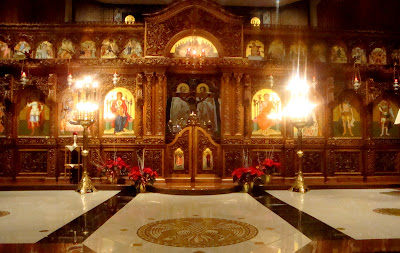 On Sunday evening, a goodly throng of English-speaking and francophone Christians gathered at the Dormition of the Virgin Greek Orthodox Church for prayer and reflection on Christ's call to be one (John 17.21).
Afterwards there was a wonderful catered reception in the Hellenic Centre next door where fellowship was extended.
Some photos: 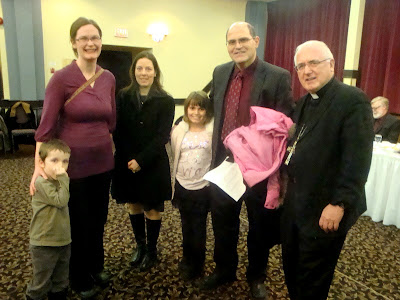 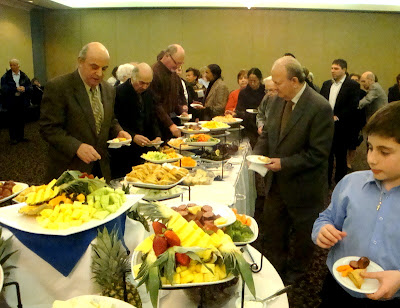 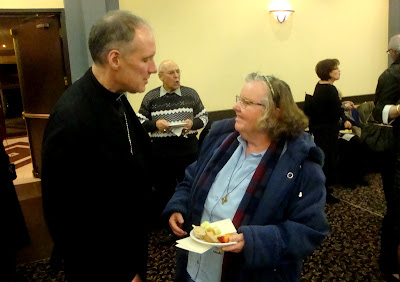 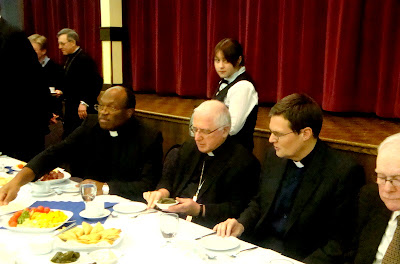 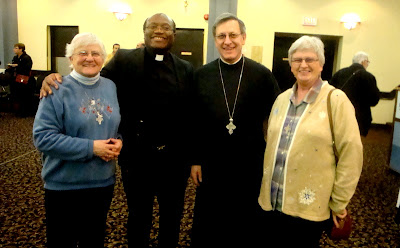 In a 24-hour period last Saturday, three members associated with the Jesuits in English Canada Province passed away.  On the morning of January 21, Father William Addley, 68, pastor of Our Lady of Lourdes Parish, Toronto (mentioned on this blog on Sunday), later that day in the Jesuit Infirmary in Pickering, Father Ernest Tyler, 94, engaged for many years in secondary education and then pastoral ministry, and then in the early hours of January 22 in Calcutta, Father Lawrence Abello, 80, scientist and pro-life advocate.
Below a few remarks on Fathers Tyler and Father Abello, who are commended to your prayers:
FATHER ERNEST TYLER, S.J.


This morning at 10:30, a funeral Mass will be celebrated in St. Ignatius Chapel of Manresa Spiritual Renewal Centre, Pickering, for Father Ernest C. Tyler who passed away at Rene Goupil House, Pickering on January 21, 2012, in the 94th year of his life and in the 73rd year of his religious life.
Born in Montreal, Quebec, on the April 28, 1917, he attended both Loyola High School and College and obtained a B.A. before entering the Society of Jesus on October 2, 1939 at Guelph, Ontario. He was ordained in Toronto on June 24, 1951.
After completing his studies for the priesthood, Father Tyler did a year of spirituality (Jesuit tertianship) at Xavier Hall in Pass Christian, Mississippi, USA then studied for a degree in education at the University of Toronto. In his ministry, he taught French and religion and served as an educational administrator (academic and discipline) at St. Mary’s University High School, Halifax; Loyola College High School, Montreal; St. Paul’s High School, Winnipeg; and Brebeuf College School, Toronto.
In 1969, Father began a new career in parish ministry at Our Lady of Lourdes Parish in Toronto, where he helped many people over the next fourteen years; in 1983, he moved to Waubaushene, Ontario to be pastor of St. John the Evangelist parish until 1987 when he moved to Blessed Sacrament Parish as assistant and was Chaplain at Sunnybrook Medical Centre. In 1997 to 2004, he was parish administrator for St. Eugene’s Chapel, a mission church of Blessed Sacrament Parish.
Father "Ernie", as he was called by his fellow Jesuits, loved to play golf and was always interested in the comings-and-goings of his fellow Jesuits; he retired to the Jesuit Infirmary in 2005 where he stayed until his death.

Father Lawrence Abello SJ, renowned professor, inventor and a devout companion of Mother Teresa passed away on January 22, 2012 at St Xavier's College, Calcutta (Kolkata), his home for twenty-five years. He is survived by his sister Ms Giacinta Auser and his brothers Father Louis and Tony Abello.
Born in Leuven, Saskatchewan, Lawrence Abello joined the Jesuits in 1956; he volunteered for the Darjeeling Mission and went to India in 1959, at the end of his novitiate and juniorate. His formation in India followed the usual route from philosophy in Pune to a teaching internship in Gayaganga, and theology in St Mary’s Kurseong, where he was ordained on March 19, 1966. After a period of spiritual renewal (tertianship in 1972-73) at Vinayalaya, Mumbai, he made final vows in Shembaganur on February 2nd, 1974.
In the meantime, he began what might be called his first career, as philosophy professor in several seminaries in India, during the 1960’s and1970’s, mainly in St Pius College, Mumbai.
Philosophy wasn’t his only interest in those days however; he was always drawn to the world of physics and finally entered that world at St. Louis University and completed an M.Sc. degree in that subject in 1971. On his return to India, he continued his philosophy lectures at St Pius till 1977, then returned to the USA for his PhD in physics at Wayne State University, Detroit; he held two patents for inventions. Before returning to India in 1986 on a visa which allowed him to teach in St Xavier’s, Kolkata, he was active in pro-life ministry, which he continued in India.
Father “Larry” was a devoted companion of Mother Teresa and her sisters, as confessor and guide. He was also the director of the many volunteers who came each year to work with the Missionaries of Charity, to initiate them into life in Kolkata, and especially into life among the poor of that city.
He was soon drawn to the work of Mother Teresa, and for the rest of his life his ministry revolved around it, and the parishes of the city where he became quite familiar. He obtained his Indian citizenship in 1991, through the intercession of Mother Teresa, with whom, we pray, he shares the life of those “who love the poor”.
Posted by Archbishop Terry at 6:57 AM