I have just returned from Rome and the Vox Clara meeting; here is the press release and a few photos:
VOX CLARA COMMITTEE
PRESS RELEASE
July 24-26, 2011
The Vox Clara Committee met from July 24-26 in Rome. This Committee of senior Bishops from Episcopal Conferences throughout the English-speaking world was formed by the Congregation for Divine Worship and the Discipline of the Sacraments on July 19, 2001 in order to provide advice to the Holy See concerning English-language liturgical books and to strengthen effective cooperation with the Conferences of Bishops in this regard.
The Vox Clara Committee is chaired by Cardinal George Pell (Sydney). The participants in the meeting were Bishop Thomas Olmsted, First Vice-Chairman (Phoenix), Cardinal Oswald Gracias, Second Vice-Chairman (Bombay), Bishop Arthur Serratelli, Secretary (Paterson), Cardinal Justin Rigali, Treasurer (Philadelphia, Emeritus), Cardinal Francis George, O.M.I. (Chicago), Archbishop Alfred Hughes (New Orleans, Emeritus), Archbishop Michael Neary (Tuam), Archbishop Terrence Prendergast, S.J. (Ottawa), Bishop John Tong Hon (Hong Kong), and Bishop David McGough (Birmingham, Auxiliary).
Also assisting the meeting were Monsignor James P. Moroney (Executive Secretary), Reverend Jeremy Driscoll, O.S.B (expert), Reverend Dennis McManus (expert), Monsignor Gerard McKay (advisor), Reverend Joseph Briody (special assistant) and Reverend Gerard Byrne (special assistant). Abbot Cuthbert Johnson, O.S.B. (advisor) was unable to be present.
The representatives of the Holy See included the Delegate to the Vox Clara Committee, Reverend Anthony Ward, S.M., Undersecretary of the Congregation, accompanied by officials of the Congregation.
The Committee heard reports on the widespread distribution of the Study Text on the Roman Missal and approved plans for several future publications on behalf of the Congregation, most notably an interim edition of the Roman Pontifical, including new translations of several pontifical texts drawn from the Roman Missal. It is planned that the publication will also include the Rite for the Blessing of Oils and it should be available in the first months of 2012. The publication of a collection of commemorative essays on the occasion of the tenth anniversary of the instruction Liturgiam Authenticam, under the title Toward an Authentic and Clear Voice, as well as several editions of the Missale Parvum, was also authorized.
The Committee spent the greatest amount of time on a review of the translation of the short and beautiful Latin text of the Ordo benedicendi oleum catechumenorum et infirmorum et conficiendi chrisma at the request of the Congregation. The Congregation undertook to produce this text because it was concerned to meet the needs of the Bishops of the English-speaking world for a translation of the Blessing of Oils in time for the Mass of Chrism in 2012. To cope with this unusual and pressing situation the Congregation commissioned a draft translation text, which was then developed in consultation with the Vox Clara Committee and the International Commission on English in the Liturgy. As a result of these consultations, the translation was substantially modified.
Finally, the Committee adopted plans for the revision of the Ratio Translationis for the English language, and approved the scope of work in the continuing revision of the translations of the Latin liturgical books of the Roman Rite in accord with the principles of the instruction Liturgiam authenticam. 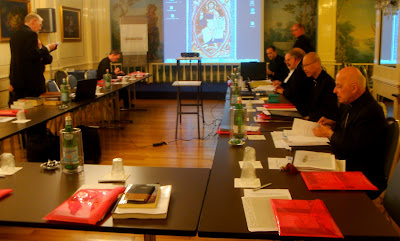 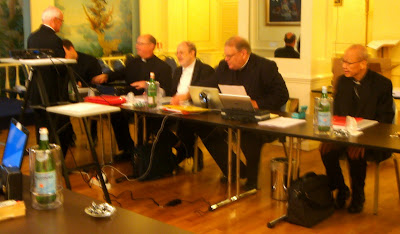 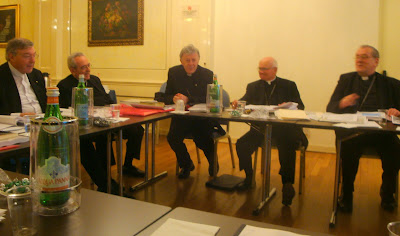 Posted by Archbishop Terry at 9:47 PM