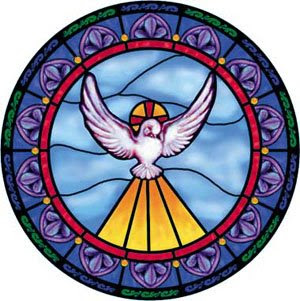 W. O. Mitchell's novel, Who Has Seen the Wind recounts several years in the life of a boy growing up on the prairies. The hero Brian O'Connal shares the limelight with the ever-present wind. The interaction between Brian and the wind begins one day as he wanders out onto the prairie and savours the life surrounding him:

'All about him was the wind now, a pervasive sighing through great emptiness, unhampered by the buildings of the town, warm and living against his face and in his hair'.

By contrast with people of the village who come and go, the wind is everlasting--like God--a fact the novel's author points out:

'People were forever born; people forever died, and never were again. Fathers died and sons were born; the prairie was forever, with its wind whispering through the long, dead grasses, through the long and endless silence.'

This parallels the theme of today's psalm that when God takes back the spirit, people die. 'When You send forth your Spirit, they are created; and you renew the face of the earth'.

God's renewal of the earth, however, can appear powerful, at times frightening, like the dynamic description of Pentecost which Luke gives in today's passage from Acts.

Mitchell grasps this aspect of the wind as well: 'The wind turns in silent frenzy upon itself, whirling into a smoking funnel, breathing up topsoil and tumbleweed skeletons to carry them on its spinning way over the prairie, out and out to the far line of the sky.'

To those familiar with the Old Testament, Luke's account of Pentecost Day would evoke the giving of the Torah to Moses on Mount Sinai. It might also suggest a reversal of the Tower of Babel story (Genesis 11:1-9).

Later, when Peter explained what was going on, he said that the prophecy of Joel ('your sons and your daughters shall prophesy, and your young men shall see visions, and your old men shall dream dreams' [2:28-32]) had been fulfilled in the outpouring of the Holy Spirit the bystanders had witnessed (Acts 2:14-36).

The "Feast of Weeks" celebrated on the fiftieth day (Greek Pentekostes) of the spring harvest, marked the end of the celebration of God's blessings. Israel gave thanks not only for the agrarian bounty but also for the greater bounty of God's love in choosing a covenant people. God's election of Israel at Sinai came to be linked with Pentecost, just as the Exodus had been with Passover.

So, at Pentecost there was praise for God's self-revelation on Sinai in 'fire' and in 'wind' and, according to first century rabbinic writings, in 'tongues.' The Pentecost day following Jesus' resurrection and ascension, then, is described by Luke as God's newest self-manifestation. Through the Holy Spirit who is to carry the power of Jesus' ministry to the ends of the world and to all peoples on the face of the earth, God becomes present in this world in a marvellously new way.

The divisions and misunderstandings that occur because people speak different languages is an aspect of the world's sinful condition that Jesus overcame through His paschal mystery. Luke shows that this reconciliation has truly come about when he tells how 'Jews and proselytes' (converts to the Jewish faith who were not yet full members of the people of God) from the whole known world grasped and expressed in their individual dialects that Jesus' disciples were telling 'God's deeds of power'. 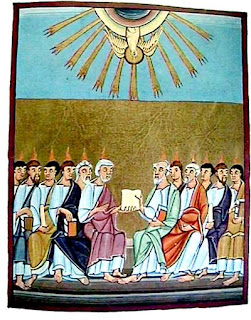 In a catalogue of places sweeping from east to west (from Parthia to Rome), Luke proclaimed that the Spirit of God was moving over the world, unifying one and all in praise of God. Pentecost appears, then, as a new beginning for humanity's relationship with God. And, as the rest of the Acts of the Apostles shows, at Pentecost the marvels had only just begun.

Encouraged by the Spirit who, as 'Advocate', teaches disciples 'everything', reminds them of 'all that I have said to you' (gospel) and causes them to cry out 'Abba! Father!' to God (second reading), members of the Church today pray for a renewal of the event of Pentecost:

'Come, Holy Spirit, fill the hearts of your faithful; and kindle in them the fire of your love' (Alleluia verse). 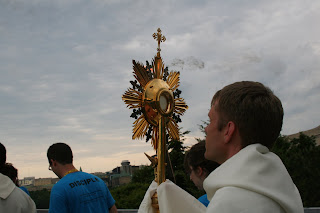 Yesterday, the young evangelists of Montee Jeunesse/ Youth Summit held a Eucharistic Procession from Gatineau's St. Joseph's Cathedral, across the Alexandra Interprovincial Bridge to Parliament Hill and back along Wellington and MacKenzie to the Ottawa Cathedral of Our Lady. It was a wonderful experience and drew noticeable attention from passersby.

The rain held off and spirits were high, just part of an extraordinary day that began with Mass at Eglise Sainte-Famille presided by Cardinal Ouellet during which he gave a powerful homily.

Workshops at Immaculata High School in the morning and at St. Paul University in the afternoon prepared for the Procession and last evening, an evening of prayer, listening to an exciting woman evangelist from New Jersey, Caroline Gambale Dirkes and some street evangelizing in the Byward Market rounded out a full day.

Some pix of the procession, courtesy of Deborah Gyapong CCN: 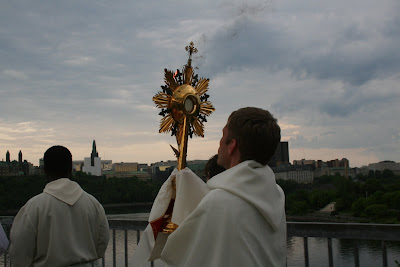 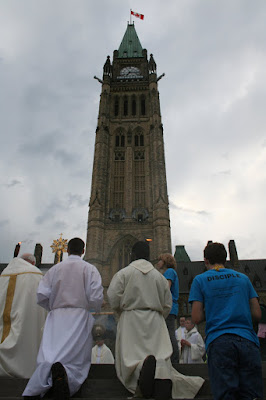 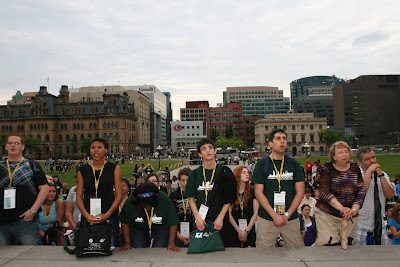 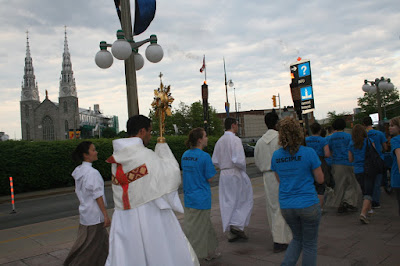 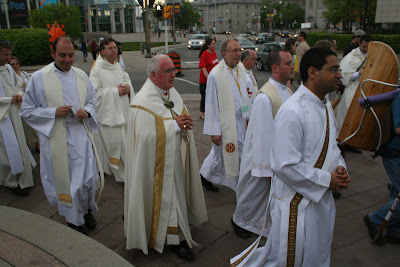 Posted by Archbishop Terry at 7:07 AM