The ASCENSION of the Lord - Diaconal Ordination of Hezuk Shroff 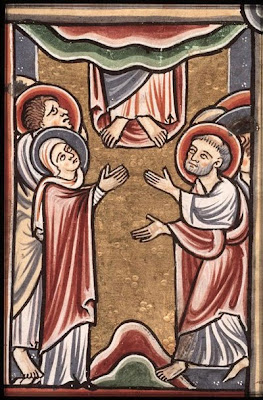 Some years ago, while I was serving in the Archdiocese of Halifax, one of the National Evangelization Teams (NET) spent time in several parishes of the diocese. During their spring-time visit, the young men and women of NET, who devote a year or two to spreading the gospel message to younger Catholics, brought a great burst of energy to our ministry to youth.

Some of these junior evangelizers serve after completing high school or a university degree; others after one or more years of college studies. For most it is a life-changing experience.

Through song and mime, group activities and solid teaching of the truths of the faith, NET members give contemporary expression to Jesus' command to the disciples at His Ascension, that 'you will be My witnesses...to the ends of the earth'.

As they testify to their knowledge and love of Jesus and their desire to follow His way of life, the fledgling evangelists are strengthened in their own faith. They come away from the year or two of itinerant travelling across Canada confirmed in their commitment to the Lord and His Church.

The arrival of the NET van coincides with parish missions for youth or pre-Confirmation retreats and gives our young people a sense of what it might be like to 'receive power when the Holy Spirit has come upon you'. The young people who take part in the rallies and faith-centered activities invariably speak of their amazement at discovering the happiness that following the Lord can bring to youth just a bit older than themselves.

Each year I served in Halifax I enjoyed receiving the NET gospellers at my home for early morning Mass, breakfast and high-energy conversation about the blessings of our faith.

Though evangelization projects such as this one had been rare in the Catholic world, I am pleased that the NET-experience, which began in the USA and later branched out to Australia and Uganda, has grown in Canada and that there are prospects for still further growth. 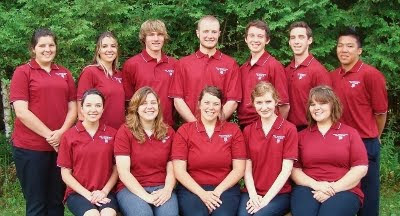 Since coming to Ottawa three years ago, I have chaired the Board of Directors NET Canada and watched the evolution of NET-Ireland, an outreach of NET-Canada, as it has grown to become a self-sustaining entity.

It would be wonderful if such a process could be developed for other age groups, so that God's design, that 'repentance and forgiveness of sins is to be proclaimed in [Jesus Messiah's] name to all nations' might be fulfilled.

Jesus' Ascension began the ushering in of the era of the Church, even if the Eleven Apostles had to wait another 10 days in Jerusalem, until Pentecost, when they would be 'clothed with power from on high', the gift of the Holy Spirit ('what My Father promised').

Henceforth, Jesus abides in God's presence 'on our behalf'. This intercession for His disciples that Jesus carries on in the Father's presence will last until He 'will appear a second time...to save those who are eagerly waiting for Him'.

The 'salvation' promised in this declaration by the author of Hebrews should be understood as the completion in each person of the saving effects of Jesus' death and resurrection, which have already begun to be worked in the believer through his or her baptism.

The two accounts of Jesus' Ascension, at the close of the Gospel of Luke and as the opening scene of the Acts of the Apostles, look upon this one reality from different perspectives.

At the close of the Third Gospel, the Ascension takes place on the evening of Easter, at Bethany (the beginning of Jesus' triumphal entry into Jerusalem). It is described as a simple parting, without the dialogue we find in Acts, and is the prelude to the disciples' returning to the Jerusalem Temple, where the gospel story began with Gabriel's appearance to Zechariah (1:5-23).

This succinct narrative helps the disciples realize that the resurrection and exaltation of Jesus have brought His presence on earth to a joyful conclusion.

Acts informs the reader that Jesus appeared to His disciples for 40 days, a lengthy time in the biblical world-view. So one may conclude that the disciples are ready now to bear testimony about the resurrection and the Good News it implies.

The Mount of Olives, where Ezekiel saw the glory of the Lord rest (11:23), was a regular place of prayer for Jesus. From there the disciples go to the Upper Room, to pray in their turn and to ready themselves to be witnesses of Jesus to the whole world. 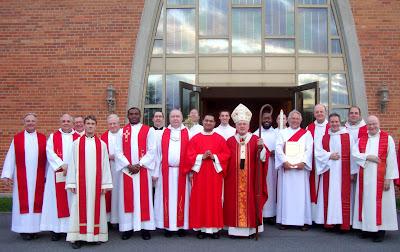 On Friday evening, the feast of the Apostle St. Matthias, Father Jeffrey King and his parish of Our Lady of Fatima hosted the diaconal ordination of Hezuk Shroff. 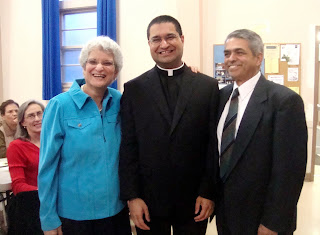 The new deacon with his parents

A convert to the faith, Hezuk grew up in the area in which Our Lady of Fatima parish is located and he is spending this summer doing pastoral ministry there.

As St. Remi parish, where he did his pastoral internship is nearby, this permitted parishioners from that parish to be present for the occasion. The Knights of Columbus provided an honour guard and a reception was held by the Catholic Women's League afterwards in the parish hall.

Deacon Shroff will return to St. Augustine's Seminary in the fall to complete his studies for the priesthood and prepare for priestly ordination in the spring of 2011. 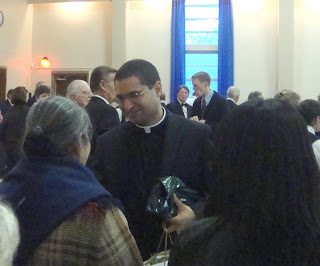 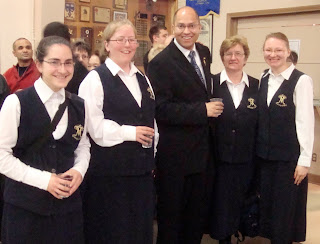 Seminarian Matthew Keshwah with Queenship of Mary community members
Posted by Archbishop Terry at 7:07 AM