Jesuit Father Laurier Harvey Served in India, Nepal and with the Missionaries of Charity 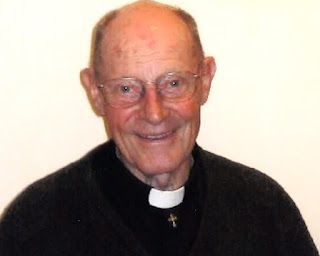 Father Laurier Crosbie Harvey, S.J. died peacefully on January 13, 2016 at Ajax-Pickering Hospital. He was in his 91st year of life and had been a Jesuit for 60 years.

The son of St. George Harvey and Pauline Laurier, Laurier was born in Montreal; his mother was the niece of Prime Minister Sir Wilfrid Laurier. After eight years of studies at Loyola High School and College, he entered at the age of 30 the Society of Jesus at Guelph in 1955. He pronounced first vows on February 2, 1957 and there followed a year of Juniorate. His studies of philosophy were divided, two years at the Jesuit Seminary in Toronto and a third year at Mount St. Michael’s in Spokane, WA. In 1959, he was granted permission to join the Jesuit mission in Darjeeling, India.

After theology studies at St. Mary’s College in Kurseong, he was ordained at Gayaganga on March 24, 1963. His Tertianship year of Jesuit spirituality followed at Hazaribagh. During his time in India from 1959 until 1982, he served in Darjeeling, Calcutta, Bhimbar, Matigara, and Gayaganga, mainly pastoral ministry and teaching.

On his return to Canada, still desiring to engage in missionary work Father Harvey journeyed to Nepal where he served at St. Xavier’s School in Kathmandu from 1983 to 1989.

Following another return to Canada, he was assigned in 1991 to take up the position of chaplain to the Missionaries of Charity in Tomsk, Siberia. This was an arduous posting to say the least, but Father Harvey reveled in the challenges it offered.

The House of Peace orphanage cared for children suffering from HIV-AIDS. Mother Teresa’s Sisters had set up a similar centre in the capital city of Yerevan, Armenia, and were seeking a chaplain, so he moved there in 1998 and served until ill health forced him to return to Canada to the Jesuit infirmary in late 2015. He made several visits to Pickering during his overseas postings, principally for medical reasons. Once he had recuperated he was always eager to get back to his mission.

An indomitable person with a strong physical constitution, nothing of missionary life ever fazed Father Laurier. The harder the posting, the happier he was. He was disappointed to leave work with the Missionaries of Charity and it became evident upon his most recent return to Canada that he was preparing for his journey to the Lord. A few days before his death, he joined the René Goupil Infirmary community for the weekly Saturday rosary in the chapel. He will be missed by his family and friends.

Celebration of the funeral liturgy will be held on Tuesday, January 20 at 10:30AM in the St. Ignatius Chapel, Manresa Retreat House, followed by a reception.  Burial will take place that same day at 2:30PM in the Jesuit Cemetery, Guelph, Ontario.


Requiescat in pace.
Posted by Archbishop Terry at 6:00 AM