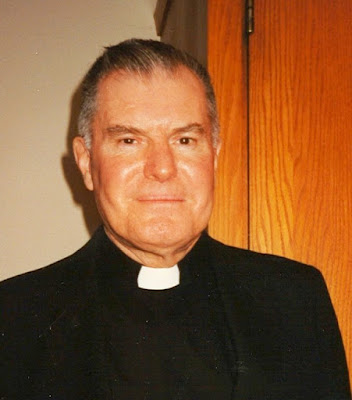 Father Donald Francis Beaudois, S.J. died on December 8, 2015 at René Goupil House, the Jesuit Infirmary in Pickering, ON. He was in his 90th year and in religious life for 70 years.

Donald Beaudois was born in Inverness, Nova Scotia on November 5, 1926. The family moved to Winnipeg, MB and Don studied at St. Paul’s High School. He entered the Society at Guelph on September 8, 1947. After novitiate and juniorate, he did the usual philosophy studies at the Jesuit Seminary in Toronto, and a three-year regency at Campion High School, Regina, SK. He was ordained by James Cardinal McGuigan in Toronto on June 22, 1958 and later did tertianship at Port Townsend, Washington.

Father Beaudois was appointed to Guelph in 1960, as assistant to the master of novices and was responsible for the coadjutor novices. In 1964, he moved to the new Brebeuf High School, Willowdale, ON. There he taught chemistry, general science, Latin and Greek for 19 years.
In 1983, Father Beaudois accepted an assignment to St. Pius X Parish in St. John’s, NL where for five years he was the associate pastor before becoming pastor.

In 1992, Father Beaudois moved to the LaStorta Jesuit Residence in Pickering, ON while ministering at Martyrs’ Shrine during the summer open season. In 1997, he became Director of Martyrs’ Shrine for a two-year period. After a sabbatical, he returned to Pickering, this time to engage in pastoral ministry in local parishes; in summers he continued a long-time association with a parish in New York State.

As a teacher, Don is remembered by his students as tough and demanding; students respected him for this. They recall having to memorize the Periodic Table of Elements in his class. Fr. Don amazed people with his pastoral zeal, vigour and energy, even in old age. A no-nonsense type of person, he carefully prepared homilies and talks and delivered them in a strong voice. He enjoyed singing parts of the Mass. He possessed a sharp memory and remembered well many events in the life of his Jesuit Province.

For Father Beaudois, his priestly vocation was the bedrock of his entire life, in action, in rest, and in the diverse expressions of daily life. The decline in his health was rapid, which led to his move to the Jesuit infirmary in the summer of 2014.

There will be visitation December 10, 2015 from 2-4 PM at Rosar-Morrison Funeral Home (Sherbourne and Wellesley Streets, Toronto), followed by visitation from 7-9PM at Loyola Chapel, Manresa Retreat House, Pickering (Prayer Service at 8PM).

The Funeral Mass will be on Friday, December 11 at 11AM in Loyola Chapel, Manresa Retreat House, Pickering  (with reception afterwards).  Burial at 2:30 PM in the Jesuit Cemetery, Guelph, ON.

Posted by Archbishop Terry at 8:51 AM