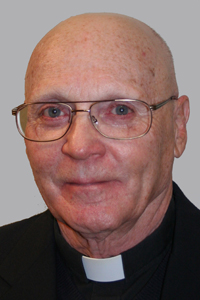 FATHER MICHAEL JOSEPH STOGRE, S.J. died unexpectedly on June 24, 2015, at the Jesuit residence in Vancouver, British Columbia. He was in his 71st year of life, four days short of his birthday, he had been in religious life for 52 years.

Michael Joseph Stogre was born in Summerside, Prince Edward Island, June 28, 1944, the eldest of eight children of Winnifred Quinn and Alexander Stogre. He grew up in Toronto, attended St. Michael's College School and entered the Jesuits in 1962. He completed a B.A. in classics, an M.A. and a licentiate in philosophy at Gonzaga University, Spokane, Washington.

As a Jesuit scholastic, he taught Latin and Science at Brebeuf College School, Toronto, 1969- 1970, followed by a year as program director of education for the Canadian Catholic Organization for Development and Peace in the Archdiocese of Toronto. During theological studies at Regis College in Toronto he completed a Master of Divinity degree, and was ordained a priest on June 8, 1974. During this period he also taught medical ethics at the St. Joseph's campus, of the George Brown College School of Nursing.

Following his studies for the priesthood, Father Stogre pursued medicine at McMaster University graduating (M.D.) with the class of 1978, which was followed by an internship at St. Joseph's Hospital, Toronto 1978- 1979. From 1979-1986 he was a staff member of the Jesuit Centre for Social Faith and Justice based in Toronto. In that capacity he worked with Amnesty International's Medical group examining political refugees, represented the Jesuits on the Aboriginal Rights Coalition and the Ontario Health Coalition. For two years he served on the board of Southdown, a treatment centre for priests and religious, and its medical therapy committee.

While working at the Jesuit Social Centre, he assisted the Rama Indian Band in starting a health clinic on their reserve, served on their Health and Welfare committee for six years, and worked on a number of environmental health issues in northern Ontario and in Toronto, (e.g. lead contamination in Riverdale, radium pollution in Scarborough and Serpent River). Other involvements included working with the pastoral team of the Canadian Conference of Catholic Bishops in preparation for the Papal visit of 1984, serving on the allocations committee of Catholic Charities of Toronto, and the ethics committee of the Catholic Children's Aid Society.

Father Stogre published a number of articles on medical ethics, the health care delivery system, Native Health, and Aboriginal Rights, gave lectures and led workshops on these topics across the country.

From 1990 until 2012 he lived at, and ministered from, the Anishinabe Spiritual Centre (ASC), on Anderson Lake, Espanola, Ontario. Among other ministries he served as visiting Pastor for a number of parishes in the Algoma—Manitoulin area and served on the United Chiefs and Council of Manitoulin’s Health board which negotiated the transfer of health services from the Federal Government to the control of the local communities. He also served a five-year stint as Director of the ASC. In 1992, he completed a doctorate in Christian Social ethics at Ottawa’s St Paul University on Papal Social Thought and Aboriginal Rights.

In January of 2013, he was assigned to the Francis Xavier Community in Vancouver, B.C. There he worked as assistant pastor of St. Mark’s parish, which included university and hospital chaplaincies on the University of British Columbia campus.

A memorial service will be held in Pickering, Ontario at the St. Ignatius Chapel of Manresa Retreat Centre on July 6, 2015 at 7:30PM.


Requiescat in pace.
Posted by Archbishop Terry at 9:08 AM