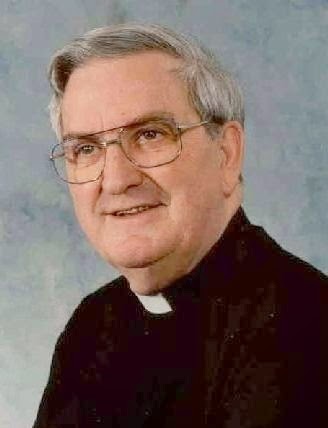 Father Edwin Ambrose Merchant, S.J. died peacefully on December 9, 2014, at Thunder Bay Regional Hospital, Thunder Bay, Ontario.  He was in his 85th year and in religious life for 66 years.

Ed Merchant was born in Port Arthur, Ontario on July 21, 1930, the son of William Merchant and Margaret Curley. He was proud to have been born in a Jesuit parish, St. Andrew’s, and later served there as pastor. He was young when his father died.  For a few years he attended Jesuit Regiopolis High School in Kingston, Ontario and entered the Society of Jesus at Guelph on July 30, 1948.

After two years of humanities study, Ed began a three year philosophy program at the Jesuit Seminary in Toronto. From 1955 to 1958, he taught Latin and French at Saint Mary’s University High School in Halifax, Nova Scotia. Returning to Toronto for the study of theology, he was ordained on June 18, 1961 in the chapel of the St. Joseph’s Motherhouse, Morrow Park, Willowdale (as the new Regis Chapel was not yet complete).  His final year of Jesuit formation (Tertianship) followed at Port Townsend, Washington.

Father Merchant delighted in learning, speaking and teaching French. Upon his return to Canada, he taught Latin and French at Campion College in Regina and then attended Georgetown University in Washington, DC to do a Master's Degree in French Studies; a memorable summer was the one he spent in Aix-en-Provence, France. All through his life, Ed appreciated films, particularly French films and would stay up at night to watch them on television; he also appreciated French Canadian popular singer-composers of the day, such as Félix Leclerc.

More years of teaching in Winnipeg and Halifax followed until 1972 when he became Chaplain at Hamilton's McMaster University. He then moved on to the University of Guelph as Chaplain at the Newman Centre for a five-year placement. In 1978, he became the director of Martyrs’ Shrine in Midland, Ontario for three years.

Following a sabbatical, he continued in chaplaincy but began to specialize in the giving the Spiritual Exercises, in Edmonton, Regina and Winnipeg. While living in the West, Ed would take trips east and visit Jesuit friends city by city.

In 1991, Father Ed returned to his birth place to become pastor of St. Andrew’s Parish,Thunder Bay. After this appointment, Ed took on a series of pastoral ministries in the Lakehead, including retreat direction; there he was also involved in Choné House and St. Anne’s Parish.

His Jesuit companions found Ed to be a quiet and shy man but very engaging and intellectually acute. He had a calm deliberation and a compassionate regard for many. His teaching and linguistic skills were remarkable, as were his homilies. He had a real talent for mimicking or imitating public personalities and could entertain his friends with his commentaries. He had a talent for organization and was uncomfortable with disorganized or unplanned events; in the 1970's he served the Jesuit Province as Secretary of the Province Commission on Ministries.

Posted by Archbishop Terry at 8:54 PM