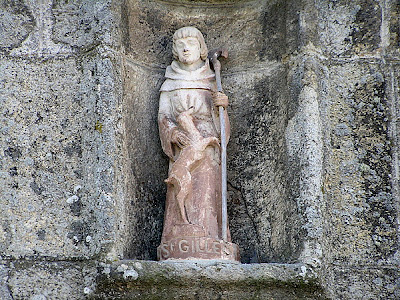 SAINT GILES,
THE PATRON OF SMITHIES
The only certain facts about Giles are that he was born in the seventh century and became head of a monastery in Provence. This slender biography, however, is entwined with multiple legends and traditions which made him one of the most popular saints of the Middle Ages.

His shrine in Provence became an important pilgrimage centre on the long road to Compostela, and his reputation spread throughout Europe. In England some 162 churches (never forgetting St Giles in Edinburgh) were dedicated to him before the Reformation, as well as 24 hospitals.

The churches bearing his name are often to be found at road junctions, where horses would have been shod nearby. Giles was the patron saint of smithies.

He also became the patron saint of the lame, lepers and nursing mothers. However doubtful the stories that clustered around his name, they clearly exercised a singularly beneficent power in a period when orthodox medicine was severely limited.

By the end of the 10th century there was a considerable apocrypha devoted to Giles. The faithful learned that he had been born in Athens, where he had become so celebrated for good works that he was forced to leave his native land in order to obtain some peace.

Attracted by the renown of the Bishop of Arles, Giles became a hermit who lived in a cave near the mouth of the Rhone. One day, though, Wamba, the king of the Goths, was hunting in the area and the arrow which he shot at a hind wounded and crippled the man of God.

Giles refused all offers of help, asking only to be left in peace. King Wamba therefore founded a monastery for him between Arles and Nîmes. It seems, though, that once again the saint’s reputation for sanctity leaked into the wider world, for one tradition presents him as confessor to the King of France at Orleans.

It was also thought that Giles had travelled to Rome to visit the Pope, from whom he acquired privileges and protection for Wamba’s foundation.

When His Holiness gave him two doors of cypress wood, the saint threw them into the sea, which duly carried them to a Provençal beach conveniently near to his monastery.

Giles, though, was obviously in Provence long enough to establish a strong local cult. After his death huge numbers of pilgrims flocked to the abbey, which in turn yielded a flourishing commerce and the development of the town of St Gilles.

By the 12th century the community had become rich enough to build a new abbey, recognised as one of the glories of the Romanesque in France. It still survives, albeit severely damaged both during the 16th-century Wars of Religion (when the area was notably Protestant in sympathy) and at the Revolution (source: Spiritual Life, August 25).

Twenty-third Sunday in Ordinary Time (Year "A") - September 4, 2011 - CORRECTING ONE ANOTHER IN LOVE - [Texts: Ezekiel 33.7-9 [Psalm 95]; Romans 13.8-10; Matthew 18.15-20]
As the school year begins, Jesus' challenge—to confront one another—in love reminds me of an incident that took place when I was in high school.  My dad had taken me aside one day to reproach me about my academic performance.
Interest in extracurricular activities (the school newspaper, dramatics, the debating team) had caused my marks to tumble, putting my scholarship at risk.  I promised I would set my priorities in order; and when the next report card came out I was glad of it
Even during our short discussion, I was aware of how difficult it must have been for my father to speak to me as he had.  Deep down, though, I knew it was being done out of love.  True love makes such demands in families, between spouses, among friends and in the church.
Christian faith is demanding indeed.  It asks that fellow disciples confront young people living together before marriage of the sinfulness of their behaviour.  That a bishop or religious superior speak to an erring priest or sister about the destructiveness of alcohol or substance abuse.  That those who cause divisions in a parish community be told they are rending the fabric of the Body of Christ.
makes a statement that seems so simple, but whose implications are great: “Owe no one anything, except to love one another”.  This is a strange way of speaking, for strictly speaking love cannot be “owed”.
One's concern for another cannot be based on what one will receive in return; for love does not operate on a quid pro quo basis.  So all that Christians may incur in their relationship with each other is the “debt” of mutual love.
Paul says the great commandments forbidding adultery, murder, stealing and coveting, “and any other commandments are summed up in this word, ‘Love your neighbour as yourself’”.
Centuries before Paul, Ezekiel had described his task as a prophet concerned about the community as that of being a watchman for the good of others.  So important was this vocation to speak God's word to that God had informed Ezekiel he would be held responsible for the lives of the wicked, if he did not tell them the error of their ways.
The eighteenth chapter of Matthew's gospel is devoted to Christ's teaching about mutual concern for the lost and erring in the Church.  The starting-point of his instruction lies in his basic call to conversion, that to be a member of the Kingdom of heaven one must first become like a child (18.1-5).  This does not mean being infantile or childish, but open and trusting towards God, as children are with their parents.
Disciples are told to avoid personal behaviour that would cause someone to go astray, they are not to put “stumbling blocks” before others (18.6-9).  Still, experience shows that Christians do stray from the path of life.
The parable of the one sheep out of a hundred that goes astray, which Jesus had told about the lost Israelite he had come to save, is now seen to apply to backsliding members of the church.  Church leaders are to seek out and to save each such member who wanders away (18.10-14).
A procedural formula for confronting disciples with the error of their ways is now offered.  The pattern suggests an initial one-on-one discussion with the offender.  This not only shows respect for the individual; it also recognizes the individual's responsibility for his or her behaviour.
Since personal errant behaviour affects others, wider church membership is called in when one will not change.  When the person refuses to listen to a church delegation, Jesus says to “let such a one be to you as a Gentile or tax collector”.
This seems to be a call to ostracize the offender until one recalls that Jesus associated freely with tax collectors, typically sharing meals with them.  In other words, one should never give up on the erring Christian. 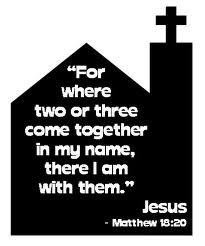 A consoling affirmation assures the community called church that Jesus is present when the community's elders decide upon a course of action to draw back those who have parted from church discipline.  “Where two or three are gathered in my name (i.e. to do as Jesus would do), I am there among them”.
Posted by Archbishop Terry at 4:46 AM