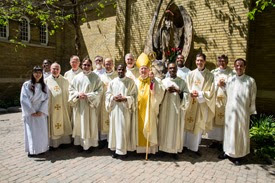 The Jesuit Priestly Ordination of Gregory Kennedy
and the Jesuit Diaconal Ordinations of
Matthew Charlesworth, Jean-Robert Déry,
Paul Robson and Emmanuel Saint-Hilaire
The Church of Our Lady of Lourdes, Toronto, ON
Saturday before Pentecost, May 23, 2015
[Texts: Job 12.7-16 [Psalm 122]; Philippians 4.4-9; John 6.1-13]

The eyes of the world and of the Universal Church are also turned today to El Salvador and the beatification of Oscar Romero, the martyred Archbishop of San Salvador. This event speaks to what we are doing here as it tells of the role of ordained leadership—whether deacon, priest or bishop—in relation to the flock entrusted to their care.

There is a powerful set of scenes in the film “Romero” that shows the gradual growth in understanding of what it means to shepherd the people of God.

The first scene shows Romero arriving in his car at a church recently taken over by a military detachment as a barracks. The Archbishop comes to withdraw the Blessed Sacrament from a church that has been desecrated by the expulsion of the poor people who had built it. As he tries to enter the church, a violent scene of gunfire ensues and he leaves in shock, seized by terror.

As he gets into the car with his driver, he looks around at the people who had witnessed the soldiers’ disdain for him, all eyes sadly looking toward him for comfort.

A short time later, he returns and after another brutal encounter with the military leader, he gathers up the hosts scattered on the floor of the sanctuary and drives off with the Blessed Sacrament.

Then, he returns a short time later, vesting as he enters the church and boldly prepares for Mass and a powerful homily, followed by the people who accompany him. The military, vanquished for now, will ultimately assassinate Romero as he celebrates Mass for his people.

Commenting in his diary, Romero noted, “I am a shepherd of my people; I have begun to learn”. In his learning, he grasped that God is close to the poor, that Christ is one with them. The disrespect that had happened in the church to Body of Christ of the reserved sacrament was being meted out to the Body of Christ, which the people of God are. This link he makes in his homily on that occasion.

The articulation of the faith of the community is the role of the ordained, whether deacon, priest or bishop.  The shepherd’s task is to be among them, ahead of them, behind them, in each and every case taking on the scent of the sheep through intimate knowledge of them. 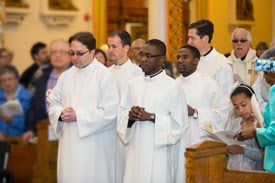 Our ordinands of today have been praying, studying, reflecting, and proposing the faith of the church for Christ’s members.

Some months ago Gregory Kennedy commented for me on the texts that he asked be incorporated into today’s ordination ceremony.

The passage from Job expresses Greg’s sense of God at work in his beautiful creatures. This is a fitting text during the wait for the release of Pope Francis’s encyclical on the environment. A sense of the sacredness of creation has long informed his faith. He sees it as primal to his Jesuit vocation.

Greg hopes, throughout his priesthood, to heed Saint Paul’s exhortation in the second reading to rejoice in the Lord—a theme amplified in the psalm refrain about the joy of going up to worship in God’s house. His wish always to preach the joy of the Gospel message is a leitmotif of Francis’s pontificate.

Finally, he sees in John the Evangelist’s version of the multiplication of the loaves and fishes an expression of the astounding double aspect of Jesus Christ, who both miraculously feeds the hungry and cares enough for the material world that He takes pains that nothing is wasted. The Lord desires to take the little we offer and multiply it so that it may feed the world and He yearns to give his Body and Blood to his disciples as nourishment for our journey to the Kingdom of the Father in all its fullness. The many times Father Kennedy will celebrate Mass in the coming years will give expression to the Lord’s wish that nothing be lost of all whom the Father has given him. 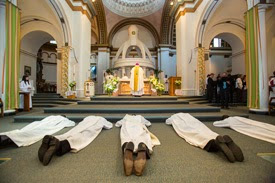 Since these our brothers are now to be advanced to the Order of Deacons and the Order of Priests, consider carefully the nature of the rank in the Church to which they are about to be raised. They are to serve Christ the great Teacher, Priest, and Shepherd, by whose ministry his Body, the Church, is continually being built up here on earth into the People of God and the temple of the Holy Spirit.

Priests and Deacons, joined to the priestly office of Bishops, will be consecrated for the preaching of the Gospel, the sanctification and nourishment of God’s people, and for divine worship, especially in the Lord’s Sacrifice. With the help of God, they should go about all these duties in such a way that you will recognize them as true disciples of him who came not to be served, but to serve. 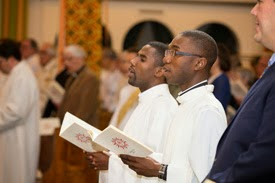 Now, Emmanuel, Jean-Robert, Matthew and Paul, dear sons, who are to be raised to the Order of the Diaconate, the Lord has given you an example that what he has done, you also should do.

As a Deacon, that is, a minister of Jesus Christ, who came among his disciples as one who served, do the will of God from the heart: serve the people in love and joy as you would the Lord. Since no one can serve two masters, look upon all defilement and avarice as serving false gods.

Since, by your own free choice you present yourself for the Order of the Diaconate, you should be men of good reputation, filled with wisdom and the Holy Spirit, as were those once chosen by the Apostles for the ministry of charity.

You will exercise your ministry committed to the celibate state: know that celibacy is a sign of pastoral charity and an inspiration to it as well as a source of spiritual fruitfulness in the world.

Compelled by the sincere love of Christ the Lord and living this state with total dedication, you will cling to Christ more easily with an undivided heart. You will free yourselves more completely for the service of God and man, and minister more effectively in the work of spiritual rebirth.

Firmly rooted and grounded in faith, you are to show yourselves chaste and beyond reproach before God and man, as is proper for ministers of Christ and of stewards of God’s mysteries. Never allow yourselves to be turned away from the hope offered by the Gospel. Now, you are not only hearers of this Gospel but also its ministers.

Hold the mystery of faith with a clear conscience. Express by your actions the word of God which your lips proclaim, so that the Christian people, brought to life by the Spirit, may be a pure offering accepted by God. Then on the last day, when you go out to meet the Lord, you will be able to hear him say’ “Well done, good and faithful servant, enter into the joy of your Lord.” 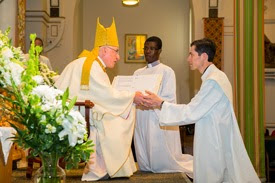 Now, dear son Gregory, you are to be raised to the Order of the Priesthood. For your part, you will exercise the sacred duty of teaching in the name of Christ the Teacher. Impart to everyone the word of God, which you have received with joy. Meditating on the law of the Lord, see that you believe what you read, that you teach what you believe, and that you practice what you teach.

In this way, let what you teach be nourishment for the People of God. Let the holiness of your life be a delightful fragrance to Christ’s faithful, so that by word and example you may build up the house which is God’s Church. 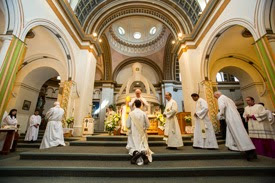 Likewise, you will exercise in Christ the office of sanctifying. For by your ministry the spiritual sacrifice of the faithful will be made perfect, being united to the Sacrifice of Christ, which will be offered through your hands in an unbloody way on the altar, in union with the faithful, in the celebration of the Sacraments. Understand, therefore, what you do, and imitate what you celebrate. As a celebrant of the mystery of the Lord’s Death and Resurrection, strive to put to death whatever in your members is sinful, and to walk in newness of life.

Remember, when you gather others into the People of God through Baptism, and when you forgive sins in the name of Christ and the Church in the Sacrament of Penance; when you comfort the sick with holy oil and celebrate the sacred rites, when you offer prayers of praise and thanks to God throughout the hours of the day, not only for the People of God but for the whole world--remember then that you are taken from among men and appointed on their behalf for those things that pertain to God. Therefore, carry out the ministry of Christ the Priest with constant joy and genuine love, attending not to your own concerns but to those of Jesus Christ.

Finally, dear son, exercising for your part the office of Christ, Head and Shepherd, while united with the Bishop and subject to him, strive to bring the faithful together into one family, so that you may lead them to God the Father through Christ in the Holy Spirit. Keep always before your eyes the example of the Good Shepherd who came not to be served but to serve, and who came to seek out and save what was lost.


Photos: Moussa Faddoul
Posted by Archbishop Terry at 5:01 AM