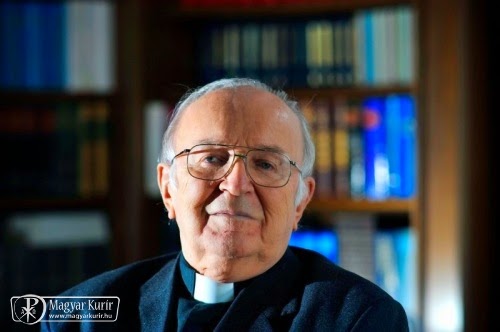 Father Béla Somfai, S.J. died on April 6, 2015 at the Jesuit Infirmary, René Goupil House, in Pickering, Ontario.  He was in his 83rd year of life and had lived nearly 63 years as a Jesuit.
Béla Somfai was born in Hungary on August 5, 1932.  He entered the Society of Jesus in Hungary on September 14, 1952.  After his initial formation, he began his study of philosophy at the Gregorian University in Rome where he earned a licentiate.

In 1959 he came to Regis College, then located at 403 Wellington Street, to begin his theological studies.  When Regis moved up to Bayview Avenue, he moved to Willowdale and was ordained a priest on June 18, 1961 by James Cardinal MacGuigan in the large, beautiful chapel of the Sisters of St. Joseph Motherhouse, Morrow Park.

Father Somfai taught for a year (1965-66) at Loyola High School in Montreal and then went on to do doctoral studies in moral theology at the University of Ottawa, where he earned a PhD.  He was awarded an S.T.D. degree from St. Paul University.  While still working on his doctorate, in 1967 he was a member of the faculty of theology of Loyola College in Montreal.  In 1969 he began teaching moral theology and medical ethics at Regis College in the Toronto School of Theology at the University of Toronto.

During his service at Regis, he became the Dean of Theology and also Prefect of Studies in the English-Canadian Jesuit Province.  When he retired from Regis in 1994, he returned to Hungary where he taught moral theology in the diocesan seminary of Szeged and at Sapientia College in Budapest for ten years.
In 2014, he returned to Canada and took up residence at St. Elizabeth Parish in Toronto, where over the years he had done occasional pastoral ministry.  Ill health caused him to be assigned to René Goupil House in Pickering in early 2015.

Father Béla Somfai was a very careful thinker, rooted in church teaching, keenly aware of the latest scientific developments and philosophical approaches, and always attentive to contemporary problems and pastoral needs.  He taught his students to think and to pastorally care for people in their struggles.  For 25 years at Regis College, the responsibility of forming young Jesuits as pastoral ministers fell largely upon his shoulders.  He taught moral theology after Vatican II, at a time when textbooks were not available, and so he made the latest and most credible journal articles on contemporary issues the basis for much of his teaching. After his return to Hungary, in order to assist his students, he wrote three books in Hungarian – on ethics, on sexual ethics and on medical ethics.

A wake service will take place at Rosar-Morrison Funeral Home (Sherbourne & Wellesley, Toronto) from 11am-3pm on Sunday, April 12; there will be a wake that same evening from 7-9pm at St. Ignatius Chapel, Manresa Retreat House (Prayers at 8 o’clock).

The Funeral Mass will be celebrated Monday, April 13 at 11am at St. Ignatius Chapel of Manresa Retreat House, Pickering, ON, with a reception to follow.

At a date to be determined, there will be a Memorial Mass in Hungarian at St. Elizabeth of Hungary Church, Toronto; burial will be in the Jesuit plot in Courtland, Ontario.

Posted by Archbishop Terry at 10:05 PM