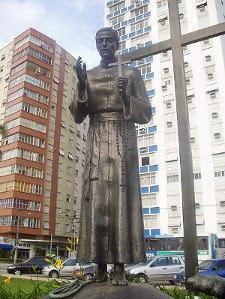 “For me, St. Anchieta means the image of an apostolic and missionary church; a person of faith who went to the peripheries of the world and human existence that which Pope Francis asks of us today; and someone who relentlessly went out to sow the seeds of the Kingdom transcending all geographical boundaries.”— Jesuit José Célio dos Santos 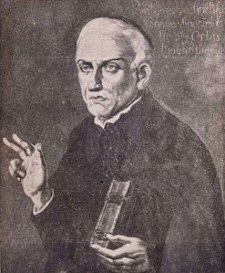 On April 3, Pope Francis canonized Blessed Jesuit Father José de Anchieta, a patron of the country’s music and literature known as the “Apostle of Brazil”. Blessed Anchieta, along with Blessed Marie de l'Incarnation, known as the Mother of the Canadian Church, and Blessed Francois de Laval, the first bishop of Quebec, were canonized by “equivalent canonization." All three saints were beatified together in 1980.

They were put on a fast track to sainthood after Pope Francis waived some of the usual procedures in response to requests from the Canadian and Brazilian bishops' conferences. President of the Brazilian bishops' conference, Cardinal Raymundo Damasceno Assis of Aparecida, announced in December that their request for Anchieta's canonization had been accepted by Pope Francis, though a miracle attributed to his intercession had not been officially confirmed.

For "equivalent canonizations," the pope adds the name of the new saint to the universal calendar of saints, without verifying that a miracle was performed through his or her intercession and without holding a formal canonization ceremony. Pope Francis last used the process to canonize Jesuit Saint Peter Fabern December 2013.

According to Jesuit Father Marc Lindeijer, assistant postulator of sainthood causes for the Jesuits, Pope Francis will celebrate a Mass of Thanksgiving on April 24 for the new St. Anchieta. Bishops and pilgrims from Brazil and from Tenerife, Spain, where the saint was born, will join the pope for the celebration in the Jesuits’ Church of St. Ignatius in Rome.

The canonization process for Anchieta has been in the process for centuries, according to Jesuit José Célio dos Santos, a Brazilian scholastic studying at the Boston College School of Theology and Ministry. “People testified to his outstanding faith and remarked on his profound apostolic witness, but clashes between the Jesuits and European kingdoms led to the suspension of the process,” he said. “Now, Anchieta’s canonization will take place in the context of the bicentenary celebration of the restoration of the Society of Jesus. His canonization is not only a gift for the church in Brazil, but also for the Society of Jesus.”

“We have many reasons for being grateful to Pope Francis for placing José de Anchieta before the world as a new and outstanding example of sanctity,” said Jesuit Father General Adolfo Nicolás. “For the Society of Jesus it is an occasion to renew with intensity the search for those horizons which he pursued and which are always new: sensitivity in the face of ethnic diversity and religious, cultural, and social pluralism; the untiring development of a fresh creative freedom and a responsible capacity for improvisation; the constant search for inculturated expressions of the Christian and evangelizing experience.”

Jesuit Father José de Anchieta was born on March 19, 1534, in the Canary Islands. An intensely religious individual, he became a Jesuit novice in 1551 and traveled to Brazil as a missionary with the third group of Jesuits sent to the New World in 1553. He and his colleague, Manuel da Nóbrega, founded a Jesuit college in Rio de Janeiro. Despite Anchieta‘s precarious health and the difficulty of his journeys, he traveled widely across Brazil for the next 10 years, consolidating the expanding missionary work of the Jesuits. In 1577, the fourth superior general of the Jesuits, Everard Mercurian, appointed Anchieta provincial superior of the Jesuits in Brazil.

Always an agent of reconciliation, Anchieta was also involved in dialogue with the Tamoyo tribe up to the point of being taken as a hostage and living among them as a prisoner for five months as the negotiations dragged on. He coped with the loneliness by composing a poem in honor of Mary, writing the Latin verses in wet sand on the seashore and then committing them to memory. He transcribed the whole poem on paper once he finally returned to São Vicente, all 4,172 lines.

Anchieta died in Brazil on June 9, 1597, at Reritiba, Espírito Santo, and was mourned by more than 3,000 native peoples who valued all he had done for them both spiritually and in the promotion of their human dignity.

St. Anchieta is an exceptionally prominent Brazilian historical figure, according to dos Santos. “As one of those instrumental in the formation of Brazil, he appears in virtually all historical literatures used in schools all over Brazil, such that every Brazilian has some knowledge of Anchieta,” he said.

“I mostly admire him for his respect and sensitivity to the cultures of the native/indigenous peoples,” dos Santos said. “For me, St. Anchieta means the image of an apostolic and missionary church; a person of faith who went to the peripheries of the world and human existence that which Pope Francis asks of us today; and someone who relentlessly went out to sow the seeds of the Kingdom transcending all geographical boundaries.” [Sources: Catholic News Service, National Catholic Reporter, Sacred Space, Jesuit Curia, Missouri Province] 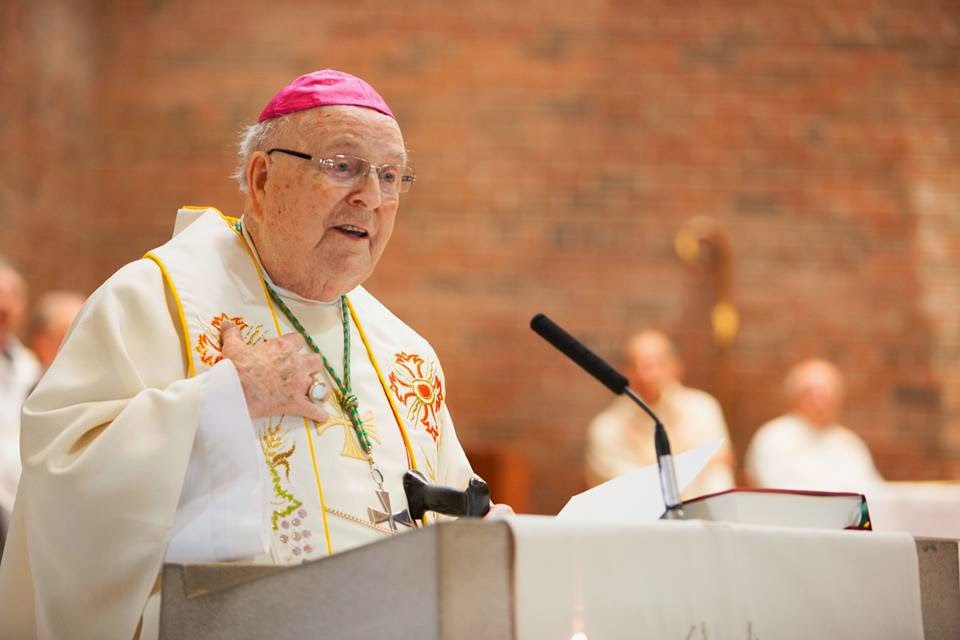 I will fly to Toronto for the funeral Monday morning, April 7 of Bishop M. Pearse Lacey at Blessed Trinity Church in Toronto's  Willowdale neighbourhood (where Regis College was located formerly [1961-76]).
Bishop Lacey had been the Auxiliary Bishop of the Archdiocese of Toronto's Western Region where he had established an office on Flagship Drive, next to St. Patrick's Church in Mississauga and where he lived until his retirement in 1993.  As his successor there from 1995-1998, I enjoyed living in that simple dwelling.  Because of our mutual responsibility for this booming region, he and I often had conversations and I found him invariably supportive of my initial steps as a bishop in Toronto and whenever we met afterwards during my service in Nova Scotia and in Ottawa.
May the Lord grant him a merciful judgment and the reward of his selfless labours.  Eternal rest grant unto him, O Lord, and let perpetual light shine upon him.  May his soul and the souls of all the faithful departed, through the mercy of God, rest in peace.
R.I.P.
Posted by Archbishop Terry at 10:33 AM